A Report based on monitoring of 107 Hospitals across Pakistan 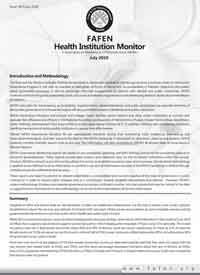 Hospitals at the backbone of state-run healthcare infrastructure, but the lack of doctors and nurses, patients’ dissatisfaction about the services and attitude of hospital staff, and poor infrastructure and sanitation at some hospitals warrant prompt governmental interventions to put this public sector healthcare system back on track.

While 96% of sanctioned doctors’ posts at District Headquarters Hospitals (DHQs), observed by FAFEN Monitors in the month of June 2010 are filled, the occupancy rate of doctors against sanctioned posts in Tehsil Headquarters Hospitals (THQs) is only 55% nationally. The lowest occupancy rates are in Balochistan and Sindh, where 60% and 59% of doctors’ posts are vacant, respectively. As many as 57% of posts for female doctors at THQs are vacant across the country. Almost half of THQ nurses’ posts are unfilled nationwide (49%), including about 80% of sanctioned nurses’ posts in Sindh.

More than one-fourth of the patients (27%) interviewed around the country at observed hospitals said that they were not happy with the way doctors had treated them at DHQs and THQs, and the same percentage expressed frustration about the lack of doctors at DHQs. About 21% of patients interviewed by FAFEN Monitors at THQs of Punjab and 33% each in Khyber Pakhtunkhwa and Sindh also complained that doctors were not present.

The buildings of about 12% of observed hospitals nationwide are in a dilapidated condition including about 21% of monitored DHQs in Khyber Pakhtunkhwa. Sanitation and hygienic conditions also warrant prompt governmental attention, especially in Balochistan (where 38% have sanitation problems) and Khyber Pakhtunkhwa (17%).

In addition, almost 13% of visited hospitals in Balochistan and 4% in Khyber Pakhtunkhwa do not have any electricity connection whatsoever, crippling the hospitals’ ability to offer basic services required by such a public facility. FAFEN’s Governance Monitors visited 107 hospitals (61 DHQs and 46 THQs) in 81 districts and two FATA agencies across Pakistan during June 2010.