A Tribute to Women Parliamentarians 2015 -16 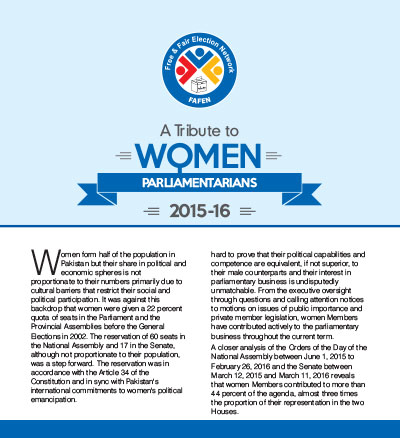 Women form half of the population in Pakistan but their share in political and economic spheres is not proportionate to their numbers primarily due to cultural barriers that restrict their social and political participation. It was against this backdrop that women were given a 22 percent quota of seats in the Parliament and the Provincial Assemblies before the General Elections in 2002. The reservation of 60 seats in the National Assembly and 17 in the Senate, although not proportionate to their population, was a step forward. The reservation was in accordance with the Article 34 of the Constitution and in sync with Pakistan’s international commitments to women’s political emancipation.

These 89 women Parliamentarians have worked hard to prove that their political capabilities and competence are equivalent, if not superior, to their male counterparts and their interest in parliamentary business is undisputedly unmatchable. From the executive oversight through questions and calling attention notices to motions on issues of public importance and private member legislation, women Members have contributed actively to the parliamentary business throughout the current term.

A closer analysis of the Orders of the Day of the National Assembly between June 1, 2015 to February 26, 2016 and the Senate between March 12, 2015 and March 11, 2016 reveals that women Members contributed to more than 44 percent of the agenda, almost three times the proportion of their representation in the two Houses. This agenda included questions, motions under rules 259 and 218, calling attention notices, resolutions, legislative bills, amendment to rules and matters under rule 87. In addition, women Members also spoke actively on points of order and contributed to parliamentary debates on a wide array of issues of public importance.

In the National Assembly, women Members sponsored or contributed to almost 60 percent of the agenda during the reporting period. They submitted 1,159 of a total of 1,617 starred questions and 519 of 1,043 un-starred questions, demonstrating their interest in Parliament’s core function of overseeing the executive.  Similarly, 28 motions under Rule 259 of a total of 50 introduced in the Lower House were moved by women Members. This was in addition to six motions under this Rule which were moved jointly by male and female Members. The contribution of women Members in the submission of calling attention notices in the Lower House has also remained impressive. Of a total of 96 notices, 24 were raised by women Members. In addition, they raised 52 calling attention notices jointly with their male colleagues.

Women were ahead of their male counterparts in the introduction of resolutions. Of a total of 71 resolutions moved by the government and private members in the House, 31 were tabled by women Members, who co-sponsored seven others with their fellow men members. Similarly, women Members individually sponsored two and jointly proposed four of a total of 15 amendments to the Rules of Procedure that appeared on the agenda. Their share in private member bills introduced in the House also remained high – 22 of a total of 26 bills.

The performance of women Members in the Senate is also noteworthy as they contributed to 18% of the total agenda for the Upper House during the year covered in this analysis. The women Senators submitted 232 out of 1,313 starred questions and 25 of 46 un-starred questions. Similarly, they moved 10 of a total of 93 motions under Rule 218 introduced in the Upper House. Under the same Rule, the women Senators also moved four motions jointly with their male counterparts. The women Members sponsored 24 out of a total of 109 calling attention notices that appeared on the agenda for the Senate. In addition, they raised five calling attention notices jointly with their male colleagues.