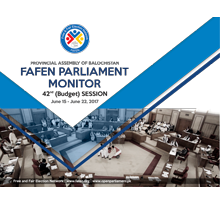 ISLAMABAD, June 22, 2017: The Balochistan Assembly passed the Finance Bill 2017 during its 42nd session following debates by nearly 62 percent of the lawmakers, observes Free and Fair Election Network (FAFEN) in its Session Report.

Forty lawmakers (62%) contributed in the Budget Debate in the Provincial Assembly of Balochistan while 25 members (38%) did not participate in the general discussion on budget. No lawmaker moved any cut motion – a tool to express disapproval or dissatisfaction over budgetary proposals.

All 25 non-participating members were male of which twelve belonged to PML-N followed by NP (four), PkMAP, BNP and PML (two each), JUI-F, BNP-A (one each) and an Independent lawmaker.

Meanwhile, twenty-nine male and all eleven female lawmakers participated in budget debate and expressed their views for eight hours and thirty-four minutes. Twelve participating members were from PkMAP followed by PML-N (nine), NP and JUI-F (seven each), PML (three), ANP and MWM (one each).

During the budget sessions of Provincial Assemblies, 60% of the lawmakers contributed to the budget debate in the Sindh Assembly, 37% legislators in Khyber Pakhtunkhwa Assembly and 21% in Punjab Assembly.

Provincial Minister for Finance presented the Provincial Budget for the Financial Year 2017-18 during first sitting on June 15, 2017 following which the House initiated general discussion on it. The Opposition Leader opened budget debate during second sitting and spoke for 30 minutes while the Chief Minster concluded debate on budget in his 32 minutes speech during fifth sitting.

The House passed the Balochistan Finance Bill, 2017 and approved a total of 77 Demand for Grants including 58 Demands for Grants for Year 2017-18 and 19 Supplementary Demand for Grants for Year 2016-17.  No member from the Opposition parties moved any Cut Motion pertaining to Demands for Grants of various government departments. The Finance Minister also laid two budget documents – the Schedule of Authorized Expenditure 2017-18 and the Supplementary Schedule of Authorized Expenditure 2016-17 – before the House during last (6th) sitting on June 22, 2017.

The Budget session comprising six sittings, commenced on June 15 and prorogued on June 22, 2017. Twelve hours and fifteen minutes long session starting with an average delay of 35 minutes per sitting was attended by maximum 45 members. On average, 29 members were observed to be present at start and 37 at the end of each sitting.