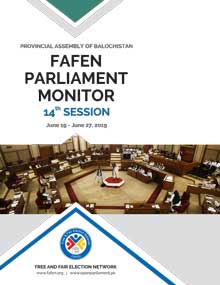 ISLAMABAD, June 29, 2019: The Provincial Assembly of Balochistan witnessed low interest of lawmakers, especially those belonging to the government, during the Budget Session, observes Free and Fair Election Network (FAFEN) in its session report.

As many as 28 members (43%) did not participate in the debate held on the Money Bill between June 19 and June 27, 2019. Majority of such lawmakers belonged to the treasury benches (21 lawmakers or 32%) while those belonging to the main opposition parties remained 11 percent or seven lawmakers.

The budget session began with the introduction of the Finance Bill, 2019 and the presentation of Annual and Supplementary Budgets on June 19, 2019. The House commenced discussion two days after the budget speech that continued for four sittings. During the session, 128 Demands for Grants were approved while all cut motions were rejected. Finally, the provincial government managed to pass the Finance Bill 2019 on June 27.

As many as 37 out of 65 lawmakers (57%) took part in the deliberations while the remaining 28 (43%) legislators did not participate in the fiscal discussion. The lawmakers spent 15 hours and 28 minutes (57% of session’s duration) on the general discussion as well as on the debate on Demands for Grants, Finance Bill and the Supplementary Budget.

Among 37 members taking part in budget discussion, four (11%) were females who consumed 34 minutes of the proceedings’ time while the remaining 33 (89%) male lawmakers discussed it for 14 hours and 54 minutes. Among the participating female lawmakers, two each were from BAP and BNP while male lawmakers belonged to BAP (11), MMA (9), BNP (4), ANP (3), BNP-A (2), HDP, JWP, PkMAP and PTI (one each).

Meanwhile, 28 members did not take part in the budget debate, among them seven were female and 21 male lawmakers. The non-participating female lawmakers belonged to BAP & MMA (two each) and ANP, BNP, PTI (one each) while nine male members from BAP, five from PTI, three from BNP and one each from BNP-A, HDP, PML-N and an Independent lawmaker did not participate in the budget debate.

The six sittings budget (14th) session started on June 19, 2019 and prorogued on June 27, 2019. Twenty-six hours and 56 minutes long session started with an average delay of an hour and 38 minutes, while each sitting lasted four hours and 29 minutes, on average. Twenty-five (38%) members, on average, were present at the outset and 26 (40%) at the time of adjournment of the sitting.

Four walkouts were carried out by the opposition lawmakers during the session for a total of 60 minutes. The walkouts were held against the lawmakers’ reservations over the Money Bill, Demands for Grants and ‘unjustified’ allocation of funds for various departments as well as criticism on JUI-F leader for ‘misusing’ social media account.

Twenty-two lawmakers spoke on Points of Order during the session, consuming two hours and 22 minutes of the proceedings. Though reserved for matters related to the rules, the lawmakers used the POs to talk about various other issues as well.