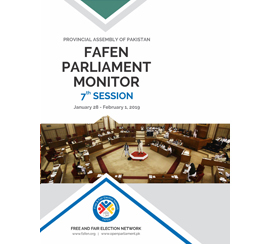 ISLAMABAD, February 6, 2019: The Balochistan Assembly addressed 73 percent of its scheduled agenda during seventh session that continued between January 28 and February 1, 2019, observes Free and Fair Election Network (FAFEN) in its Session Report.

The session’s agenda comprised four resolutions, as many Calling Attention Notices (CANs), an Adjournment Motion and general discussions on natural resources and drought situation in the province.

Of 65 lawmakers, 35 (54 percent) including 31 men and four women contributed to the proceedings of the House by sponsoring various parliamentary interventions and/or contributing to the debate on them. The active lawmakers belonged to BAP and BNP (eight each), MMAP (seven), PTI and ANP (three each), HDP (two) and PkMAP, JWP and BNP (one each) while a lawmaker was independent.

On the other hand, as many as 30 lawmakers including 23 men and seven women did not participate in the proceedings during the session. Of 30 non-participating members, 16 were from BAP, four each from MMA and PTI, two each from BNP and BNP-A and one each from PML-N and ANP.

No legislative business appeared before the House during the session while ministerial absence caused deferment of a Call Attention Notice as well as question hour during one sitting. The discussions on natural resources and drought situation consumed three hours and 59 minutes or 26 percent of the proceedings. As many as 26 lawmakers participated in the discussions.