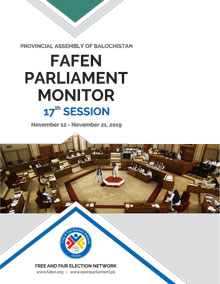 ISLAMABAD, November 22, 2019: The Provincial Assembly of Balochistan addressed the entire scheduled agenda during its 17th session that continued between November 12 and November 21, 2019, observes Free and Fair Election Network (FAFEN) in its Session Report.

Of 65 lawmakers, 20 (31%) lawmakers – 19 male and one female – participated in the debates held on various agenda items taken up during the House proceedings. Of 20 participating lawmakers, seven belonged to BAP, five to BNP, three to MMAP, two to HDP and one each to PkMAP, ANP, and BNP-A.