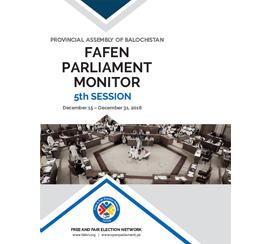 ISLAMABAD, January 10, 2019: The Provincial Assembly of Balochistan addressed its entire scheduled agenda during its fifth session that continued between December 15 and December 31, 2018, observes FAFEN in its Session Report of the Provincial Assembly of Balochistan.
The session’s agenda comprised 12 resolutions, four Calling Attention Notices (CANs), two legislative proposals, three Adjournment Motions and two statutory reports. Of 65 lawmakers, 44 (68 %) contributed to the proceedings of the House by sponsoring various parliamentary interventions or debate on them.

Moreover, 44 lawmakers – 39 male and five female – participated in the debates held on various agenda items taken up during the House proceedings. Of 39 male lawmakers, 14 belonged to BAP, eight each to BNP and MMAP, two to BNP-A, and one each to PkMAP, PML-N and PTI, while one was independent. Of five female lawmakers participating in the debates, three were from BAP and one each from BNP and ANP.