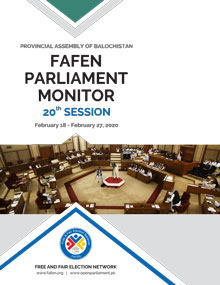 ISLAMABAD, February 28, 2020: The Provincial Assembly of Balochistan addressed 25 percent of the scheduled business during 20th session that commenced on February 18, 2020, and continued until February 27, 2020, observes Free and Fair Election Network (FAFEN) in its session report.

Low attendance of the lawmakers was noticed during all four sittings as on average 13 lawmakers (20%) were observed to be present at the start and 11 members (17%) at the end of each sitting. Two minority members attended all sittings. Cumulative time of the four sittings of the session was 14 hours and 37 minutes, while each sitting, on average, started an hour and 21 minutes behind the schedule and lasted three hours and 39 minutes. Lack of quorum was pointed out by the Provincial Minister for Food that led to the prorogation of the session on February 27, 2020.