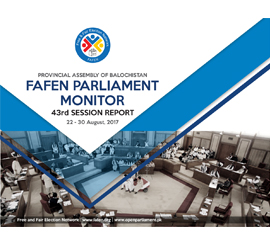 ISLAMABAD, 31 August 2017: The Provincial Assembly of Balochistan adopted six resolutions and passed two government bills during four-sitting session held between August 22 and August 30, 2017, observes FAFEN’s report on the 43rd session of the House.

On an average, 32 percent lawmakers were observed to be present at the start of the proceedings and 15 percent at the adjournment of sitting. Similarly, each sitting started an hour and 20 minutes behind the scheduled time and lasted on average two hours and 35 minutes. The cumulative duration of four sittings was 10 hours and 19 minutes, including a prayer break for 60 minutes.

The Speaker attended the entire sittings and presided over the proceedings for eight hours and 18 minutes (80 percent of the session) while a Member of Panel of Chairpersons chaired the rest of the proceedings (an hour and one minute). The post of Deputy Speaker is lying vacant since December 2015. The Leader of the House (Chief Minister) did not attend the session while the Leader of the Opposition remained present in only one sitting for two hours and three minutes. The parliamentary leaders of PkMAP attended all the sittings while the ANP leader attended three sittings. Moreover, the leaders of MWM and JUI-F were present in one sitting each. The parliamentary leaders of PML-N, NP, PML and BNP remained absent during the entire session.

The Assembly adopted six resolutions, urging the government to set speed limits for buses and vehicles on main roads to avoid road accidents due to over speeding; calling for establishing Dar-ul-Aman in all Divisional Headquarters of the province to facilitate women who became victims of domestic violence; demanding provision of natural gas to District Harnai; recommending the Federal government to provide gas to all districts of Balochistan; revising pay scale of civil services employees and completing the Kachhi Canal project on agreed terms.

Eleven PkMAP lawmakers, four of NP, two of JUI-F and one member of PML-N moved three joint, two private and one government resolutions during the session. Four adopted resolutions appeared on the List of Business while two more resolutions were moved as supplementary agenda items.

The Assembly witnessed presentation of two reports of the standing committees on legislative proposals, a special committee report on increase in admission fee of Balochistan University and an audit report by the Auditor General for Public Sector Enterprises. A report of the Finance Committee on performance of the Provincial Assembly during Financial Year 2016-17 was presented during the fourth sitting, however, the Speaker referred it back to the relevant standing committee after registering concerns of the members.

The Question Hour, held in two sittings, included five Starred Questions related to the departments of Home (four) and Service and General Administration (one). The relevant ministers responded to the questions on floor of the House while the lawmakers raised 13 supplementary questions. During the first sitting, the Question Hour was deferred due to absence of the mover while it was deferred in the third sitting due to the ministerial absence.

The House took up three out of five Call Attention Notices (CAN) appearing on the agenda. The relevant departments provided written responses against two notices regarding delay in the completion of electricity schemes by WAPDA and expenditure from the Government Consolidate Fund. A CAN about the delay in issuance of dynamite licenses to the mill owners for digging of chromite mines in Districts Pishin and Muslim Bagh was referred to the standing committee while another CAN regarding distribution formula for vacancies of Levies Force was deferred due to ministerial absence. In addition, one notice regarding the actions taken by the Irrigation and Energy department as recommended by the standing committee in its report on the project related to expansion of Pat Feeders remained unaddressed.

Lawmakers belonging to PkMAP and NP raised two CANs each while one CAN was sponsored by a female lawmaker of JUI-F.

Lawmakers spoke on 10 Points of Order (POs) during the session, consuming 49 minutes of the proceedings (eight percent of the session). As many as eight lawmakers belonging to PkMAP (4), JUI-F (3), NP (2) and PML-N (1), expressed their views on them. The political issues and governance matters were amongst main issues discussed during POs.

A lawmaker belonging to PkMAP submitted a Question of Privilege during first sitting against misbehavior of the local security personnel with him which was referred to the relevant standing committee.