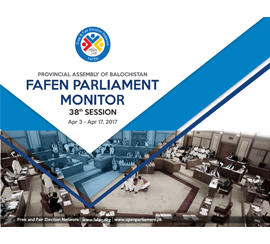 ISLAMABAD, April 21, 2017: The Provincial Assembly of Balochistan amended its Rules of Procedure and Privileges by introducing last half an hour of the proceedings “Zero Hour” to address matters of public importance. It also passed a government bill and four resolutions during 38th session that held six sittings between April 3 and April 17, 2017. The Assembly did not hold election to the office of Deputy Speaker lying vacant since 2015.

The Assembly also witnessed introduction of four government bills which were referred to the relevant standing committees. The proposed and approved legislation related to revision of fines on traffic rules’ violations, regulation of low cost housing schemes, prohibition of child marriages and welfare of senior citizens and persons with disabilities.

Through resolutions, the House recommended the government to teach journalism as a subject in colleges, ban use of polythene bags, provide electricity to Sohbat Pur, Nasirabad and Jaffarabad districts and ensure security of Baloch and Pashtun students enrolled in the universities outside the province.

The House amended its Rules of Procedure to include provisions for raising points of public importance and constitution of Ethics and Advisory Committee. Other business transacted during the course of session included a Calling Attention Notice and 16 Starred Questions. The questions were addressed to the departments of Local Government and Rural Development; Home; Communication Development; Planning and Development; Finance and Public Health Engineering.

The Chief Minister attended three sittings while the Leader of the Opposition was present in only one sitting. The Parliamentary leaders of PkMAP and ANP were present in five sittings whereas the leaders of BNP-M and the government ally, NP, remained absent throughout the session. On average, 19 (29%) lawmakers were observed to be present at the outset and 17 (26%) at the adjournment of a sitting.

Every sitting of the session, except one, was followed by a break of two days. So far the Assembly has completed 89 working days; whereas it actually met for only 43 days, less than half of the working days.