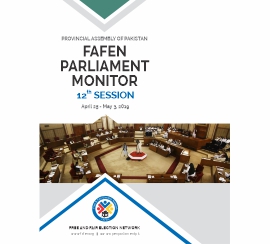 ISLAMABAD, May 8, 2019: The Provincial Assembly of Balochistan did not addressed 68 percent of its scheduled agenda during 12th session that continued from April 25 to May 3, 2019, observes Free and Fair Election Network (FAFEN) in its Session Report.

The session witnessed a low attendance at the commencement and adjournment of the sittings as an average 12 (20 percent) lawmakers were present at the outset and 22 (36 percent) at the adjournment of each sitting on average. The points of order raised by the lawmakers consumed 23 percent of the proceedings.

Of 65 lawmakers, 16 (25 percent) including 13 men and three women contributed to the proceedings of the House by sponsoring various parliamentary interventions and/or contributing to the debate on them. The active lawmakers belonged to BAP (five), BNP-M (three), PTI, MMAP and BNP (two each) and PkMAP and HDP (one each).