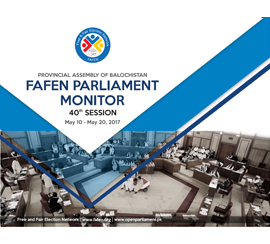 ISLAMABAD, 23 May 2017: The Provincial Assembly of Balochistan passed three bills and adopted four resolutions during 40th session that spanned over five sittings held between May 10 and May 20, 2017. With the conclusion of this session, the Provincial Assembly completed its 100 Working Days of fourth parliamentary year. The provincial assemblies are constitutionally required to meet for at least 100 working days in a parliamentary year.

The legislation passed during this session focused on welfare of senior citizens, persons with disabilities and homeless people. The province was due to legislate on these matters in wake their devolution under the Constitution (Eighteenth Amendment) Act, 2010. The Assembly also adopted the recommendations to constitute Ethics and Advisory Committee of the House and allocation of time to discuss Points of Public Importance.

On an average, 28 percent lawmakers were observed to be present at the start of the proceedings and 23 percent at the adjournment of sitting. Similarly, each sitting started 43 minutes behind the scheduled time and lasted for average two hours and 20 minutes. The cumulative duration of five sittings was 11 hours and 40 minutes including a prayer break for 17 minutes and a suspension of an hour and 17 minutes due to lack of quorum.

The Speaker attended only one sitting and presided over the proceedings for 45 minutes (six percent of session) while a Member of Panel of Chairpersons presided over the rest of the proceedings (nine hours and 21 minutes). The post of Deputy Speaker is lying vacant since December 2015. The Leader of the House (Chief Minister) did not attend the session while the Leader of the Opposition was present in one sitting for two hours and two minutes. The parliamentary leaders of PML and NP attended all sittings while the leaders of NP and PkMAP attended four sittings each. Moreover, the leader of MWM was present in two sittings and leader of JUI-F in one sitting. The parliamentary leaders of PML-N and BNP were absent during entire session.

The Assembly adopted four resolutions during the session. A resolution sponsored by JUI-F and NP lawmakers recommended to the federal government to provide Hajj opportunity to unsuccessful Hajj applicants of Balochistan as well. A PML-N lawmaker’s resolution demanded construction of a flyover on Askari Park Airport Road, Quetta while a joint resolution of PML-N and NP lawmakers urged the government to provide funds for Pakistan Television Quetta Center. The House also passed a resolution moved by PML-N lawmaker to condemn the Afghan forces’ attack on Chaman Border.

The House adopted recommendations of the Standing Committee on Rules of Procedure and Conduct of Business to include the provisions for constitution of Ethics and Advisory Committee and allocation of time to discuss Points of Public Importance in the Assembly’s Rules of Procedure. The proposals to make these provisions in the rules were submitted by the government.

The Question Hour was held during two sittings only and included three Starred Questions addressed to the departments of Home (two) and Finance (one). The relevant ministers responded to the questions on floor of the House while the lawmakers raised three supplementary questions as well.

The Assembly debated an Adjournment Motion moved by JUI- F lawmakers during second sitting. The regular agenda of that day was suspended to debate the motion regarding suicide attack on the Convoy of the Secretary General of JUI-F and the Deputy Chairman of Senate Abdul Ghafoor Haideri in Mastung. Fifteen lawmakers took part in the discussion consuming two hours and 48 minutes.

The House took up five Call Attention Notices during the session. The relevant ministers responded to these notices which were about youth welfare, teachers’ promotions, perks of civil servants, regularization of ad-hoc government employees and delay in release of funds to various departments. PkMAP lawmakers raised three CANs while JUI-F and ANP lawmakers raised one CAN each.

The Assembly witnessed one incident of walkout by opposition lawmakers during second sitting of the session. The protested lawmakers had reservations over the refusal of the treasury to convert an Adjournment Motion about attack on Deputy Chairman of Senate into a resolution of the Assembly.

The quorum was pointed out only once during the session. It was identified by a lawmaker belonging to ANP during last sitting and led to suspension of the proceedings for an hour and 17 minutes.

Lawmakers spoke on 48 Points of Order (POs) during the session, consuming two hours and 24 minutes of the proceedings (18 percent of the session). As many as 23 lawmakers belonging to NP (7), JUI-F (6), PkMAP (5), PML-N (4) and ANP (1), expressed their views using the Points of Order. The political issues and governance matters were amongst the main issues discussed using POs.