Balochistan Assembly Transacts More than Half Agenda during 16th session 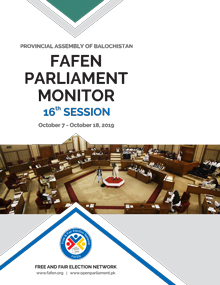 ISLAMABAD, October 19, 2019: The Provincial Assembly of Balochistan transacted 52 percent of the scheduled business during 16th session that continued between October 7, 2019 and October 18, 2019, observes Free and Fair Election Network (FAFEN) in its session report.

The session witnessed low attendance of the lawmakers as on average 14 lawmakers (22%) were observed to be present at the start and 15 members (23%) at the end of each sitting. Three minority members attended the entire session. Cumulative time of the five sittings of the session was 14 hours and 28 minutes, while each sitting, on average, started an hour and 22 minutes behind the schedule and lasted two hours and 53 minutes.

The Leader of the House remained present in one sitting and attended 13 percent of the session’s time, while the Opposition Leader was present in all sittings and attended the entire proceedings.