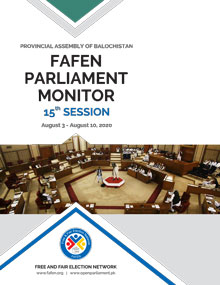 On an average, 19 (29%) members were present at the outset and 18 (28%) at the end of each sitting. The cumulative duration of all four sittings was 12 hours and nine minutes. Each sitting, on average, started an hour and eight minutes behind the scheduled time and lasted three hours and two minutes.