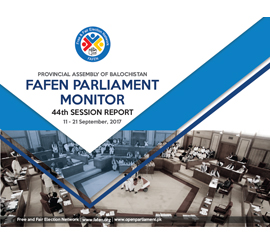 ISLAMABAD, September 27, 2017: The 44th session of the Balochistan Assembly passed seven resolutions amidst low attendance of the lawmakers throughout the session, observes the Free and Fair Election Network (FAFEN).

The session, comprising five sittings, started on September 11, 2017 and concluded on September 21, 2017. On average, each sitting started 47 minutes behind the schedule and lasted two hours and 42 minutes.

FAFEN conducts a headcount of members at the commencement and adjournment of each sitting and also documents the actual time spent by the legislators, including the Chief Minister, Opposition Leader, Speaker and Deputy Speaker. According to FAFEN’s observation, the lawmakers’ attendance remained low throughout the session – with an average of 20 (31%) members present at the commencement and 16 (25%) at the adjournment of each sitting. The Chief Minister was present in three sittings and attended the 24% of the proceedings, while the Leader of the Opposition attended four sittings for a total of 67% of the proceedings. The speaker was present in four sittings and presided over 63% of the session. A member of the Panel of Chairpersons presided over the rest of the proceedings (37%).  The office of the Deputy Speaker is lying vacant since December 2015. Moreover, the parliamentary leaders of JUI-F, ANP and NP attended four sittings each while the leaders of PkMAP and PML-N attended three sittings each. The parliamentary leader of BNP did not attend any of the sittings.

The House took up one Privilege Motion of NP lawmaker regarding allegations of corruption against him which was referred to the relevant committee.

The lawmakers moved five Calling Attention Notices (CANs). Two of these notices were addressed to the Services and General Administration Department (S&GAD) and one each to departments of Health, Home and Finance.  Two of the CANs were responded to by the government during the proceedings while one was referred to the relevant standing committee. The remaining two notices were not addressed due to absence of the concerned lawmakers. The lawmakers highlighted the issues related to embezzlement in government consolidated funds and dilapidated condition of Balochistan House in Islamabad. The CAN forwarded to the relevant committee was regarding benefits to government officers posted outside Balochistan while another notice disposed of in the House was about delay in issuance of licenses to mine owners and CAN regarding funds allocation for procurement of medicines for District Headquarters Hospital, Barkhaan was deferred.

Lawmakers raised 28 Points of Order consuming 80 minutes of proceedings. Only five starred questions were listed for answers in four sittings of the session. The House took up only two questions during the proceedings. The legislators raised two supplementary questions as well to further clarify the government’s response.

The government presented four reports before the House on the issues related to issuance of bogus domiciles of Balochistan province, verification of doctors’ degrees, issuance of dynamite licenses to mine contractors and Audit report for Financial Year 2016-17.

The House adopted seven resolutions condemning the violence against Rohingya Muslims in Myanmar and making recommendations to the government regarding construction of Balochistan House in Karachi; reviewing agricultural policy; making legislation for moon-sighting; display of anti-Pakistan posters related to Balochistan in Geneva; fair share for the Balochistan in resources and payment of compensation to the families of mineworkers who lost their lives during their work.

A lawmaker moved a resolution about teachers’ training to control physical and mental violence against students but it was withdrawn later.

The lawmakers also submitted five Adjournment Motions (AM) during the session. The motion about violence Rohingya Muslims was clubbed with the resolution on the same subject whereas a motion regarding illegal possession and leasing of government land by former provincial health minister was debated in the House. Another motion for discussion on dynamites licenses for mining was also admitted for the debate. The motion about Balochistan Employees Quota was deferred and the one about inductions in government departments on fake domiciles was withdrawn by the concerned lawmaker.

The House witnessed only one instance of walkout during the session. A lawmaker belonging to NP staged the walkout for 56 minutes against the federal government for importing onion from Afghanistan.