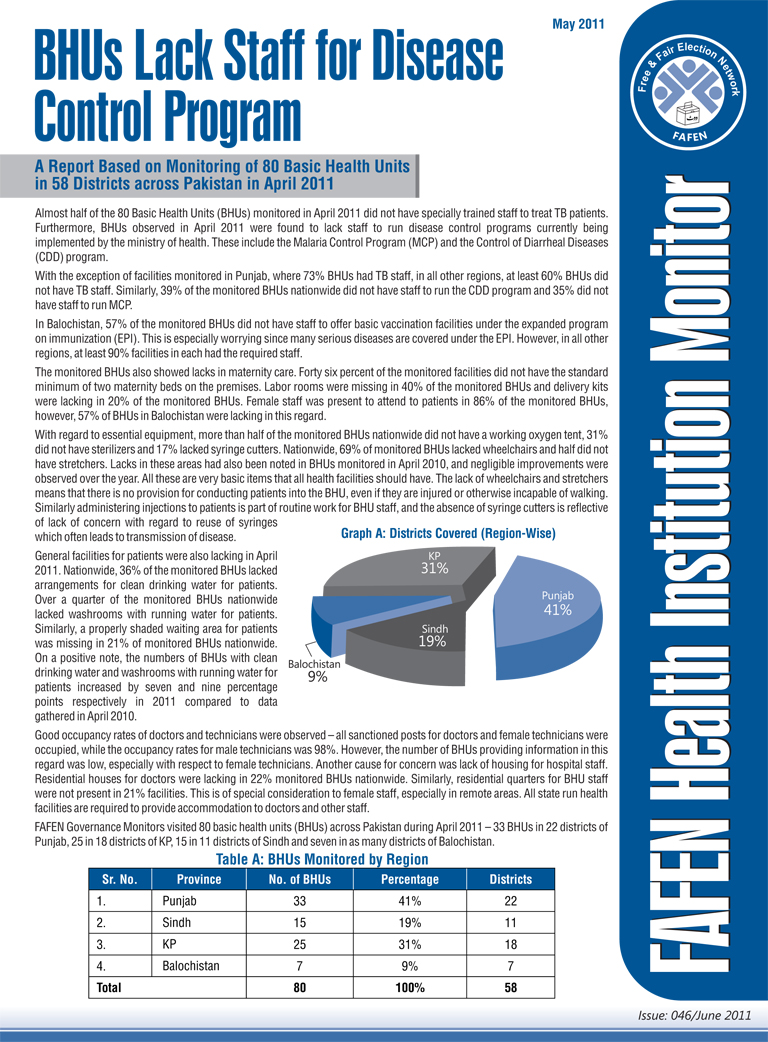 ISLAMABAD, June 6, 2011: Almost half of the 80 monitored Basic Health Units (BHUs) in April 2011 by FAFEN did not have specially trained staff to treat TB patients. There was also a noticeable shortage of staff to run disease control programs currently being implemented by the ministry of health. These include the Malaria Control Program (MCP) and the Control of Diarrheal Diseases (CDD) program.

FAFEN Governance Monitors visited 80 basic health units across Pakistan during April 2011 – 33 BHUs in 22 districts of Punjab, 25 in 18 districts of KP, 15 in 11 districts of Sindh and seven in as many districts of Balochistan.

In Balochistan, 57% of the monitored BHUs did not have staff to offer basic vaccination facilities under the expanded program on immunization (EPI). This is especially worrying since many serious diseases are covered under the EPI. However, in all other regions, at least 90% facilities in each had the required staff.

With regard to essential equipment, more than half of the monitored BHUs nationwide did not have a working oxygen tent, 31% did not have sterilizers and 17% lacked syringe cutters. Nationwide, 69% of monitored BHUs lacked wheelchairs and half did not have stretchers. Lacks in these areas had also been noted in BHUs monitored in April 2010, and negligible improvements were observed during the current monitoring. All these are very basic items that all health facilities should have.

The lack of wheelchairs and stretchers means that there is no provision for conducting patients into the BHU, even if they are injured or otherwise incapable of walking. Similarly, administering injections to patients is part of routine work for BHU staff, and the absence of syringe cutters is reflective of lack of concern with regard to reuse of syringes which often leads to transmission of diseases.