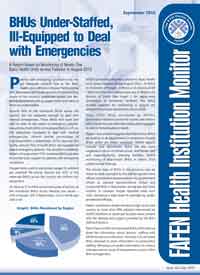 ISLAMABAD, September 21, 2010: Patients with emergency conditions do not have access to adequate medical care at the Basic Health Units (BHUs) in Khyber Pakhtunkhwa (KP), Balochistan and Sindh, as most of these building blocks of the country’s healthcare system lack life-saving equipment such as oxygen tents and many of them are under-staffed, reports FAFEN’s Health Institution Monitor for the month of September 2010, released here Tuesday.

Around 40% of the monitored BHUs across the country are not prepared enough to deal with medical emergencies. These BHUs lack ward and staff to cater to the needs of emergency patients. Around two-thirds (64%) of monitored BHUs in KP, 56% in Balochistan and 45% in Sindh are incapable of attending emergency patients. The situation is relatively better in Punjab where 77% monitored BHUs are capable of providing basic support to patients with emergency conditions. Oxygen tents used to administer oxygen to patients are essential life-saving devices but 42% of the observed BHUs across the country lack this equipment.

Some 32% BHUs monitored by FAFEN’s Governance Monitors across the country are without labor rooms but are otherwise adequately equipped to cater to the needs of female patients.

The dismal state of BHUs in the province may be linked to week oversight by the relevant government officers and elected representatives. No government officer or elected representative visited any monitored BHU in Balochistan during the last three months. In contrast, Punjab reported a superior rate of such visits, indicating a higher level of oversight by public and elected officials.

About FAFEN: FAFEN is a network of 35 civil society organizations working to foster democratic accountabilities in Pakistan. It is governed by Trust for Democratic Education and Accountability. For more information please visit www.fafen.org.