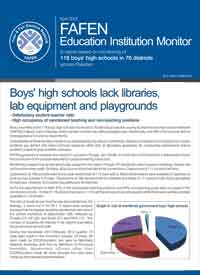 ISLAMABAD, May 23: About two-fifths of the 118 boys’ high schools monitored in 76 districts across the country in March had no libraries while a similar number was without playgrounds. Additionally, one-fifth of the schools did not have apparatus for science experiments, says a Free and Fair Election Network (FAFEN) report.

The report released Wednesday said unavailability of these facilities needs to be addressed by the relevant authorities. Absence of libraries and playgrounds means students are denied vital extra-curricular exposure while lack of laboratory apparatus for conducting experiments leaves students unable to grab scientific concepts.

FAFEN governance monitors who visited 51 schools in Punjab, 33 in Sindh, 31 in KP, two in FATA and one in Balochistan found that one-fourth of the schools were without physical training instructors

According to the report, almost all schools, except for one each in Punjab, KP and Sindh, were housed in buildings. Sixteen did not have boundary walls. Similarly, all but four schools had electricity connections. Classrooms of 111 schools had fans.

As for the appointment of staff, 87% of the sanctioned teaching positions and 93% non-teaching posts were occupied in the monitored schools.  A total of 116 schools had peons; 115 had the services of security guards while there were sanitary workers available in 113 of them.

The report said that during the December 2011-February 2012 quarter, 73 visits were made to the monitored schools. Of these, 36 were by EDO/Education; two by Members National Assembly and four by Members of Provincial Assembly.

Government officials other than EDO/Education made 26 visits whereas five visits were made by other elected representatives.