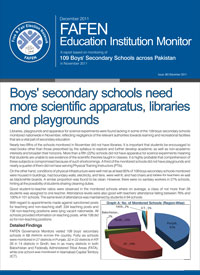 Libraries, playgrounds and apparatus for science experiments were found lacking in some of the 109 boys’ secondary schools monitored nationwide in November, reflecting negligence of the relevant authorities towards learning and recreational facilities that are a vital part of secondary education. Nearly two-fifths of the schools monitored in November did not have libraries. It is important that students be encouraged to read books other than those prescribed by the syllabus to explore and further develop academic as well as non-academic interests and broaden their horizons. More than a fifth (22%) schools did not have apparatus for science experiments meaning that students are unable to see evidence of the scientific theories taught in classes. It is highly probable that comprehension of these subjects is compromised because of such shortcomings. A third of the monitored schools did not have playgrounds and nearly a quarter of them did not have serving Physical Training Instructors (PTIs).

On the other hand, conditions of physical infrastructure were well met as at least 85% of 109 boys secondary schools monitored were housed in buildings, had boundary walls, electricity, and fans, were well lit, and had chairs and tables for teachers as well as black/white boards. A similar proportion was found to be clean. However, there were no sanitary workers in 27% schools, hinting at the possibility of students sharing cleaning duties. Good student-to-teacher ratios were observed in the monitored schools where on average, a class of not more than 28 students was assigned to one teacher. Attendance levels were also good with teachers’ attendance falling between 76% and 100% in 101 schools. The same level of attendance was maintained by students in 94 schools.