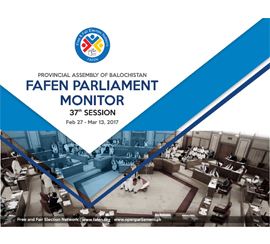 ISLAMABAD: The Provincial Assembly (PA) of Balochistan adopted five resolutions and witnessed presentation of standing committee’s report that approved introduction of Call Attention Notice and constitution of sub-committees in Assembly rules. The House, however, could not elect its Deputy Speaker since December 2015, in violation of Rule 10 of the Rules of Procedure, observes Free and Fair Election Network (FAFEN) in Session Report.

Highlights of the six-sitting 37th session of Balochistan Assembly starting from February 27 to March 13, 2017, include presentation of standing committee report to add important tool of executive oversight in the Assembly rules, demand increase in Hajj quota for the province, initiate debate on water distribution procedure and condemn racial profiling of Pashtun and Baloch communities in Punjab and Sindh.

The only bill, the Balochistan Motor Vehicle (Amendment) Bill, 2017, appeared on the legislative agenda during the entire session was referred to the relevant standing committee after introduction.

The adopted resolutions related to the discriminatory attitude of law enforcement agencies against the Pukhtun community during search operations in Sindh and Punjab, demand for raise in Hajj quota for Balochistan, call for sharing water with Balochistan as per agreed formula, demand to add a separate box for special persons in Census form and express condolence over demise of a sitting JUI-F lawmaker.

Party-wise details of the resolutions appearing on the agenda indicate that JUI-F lawmakers tabled five resolutions, followed by PkMAP (3) and one resolution each by PML-N and NP legislators.

On average, 20 (31%) lawmakers remained present at the outset and 14 (22%) at the adjournment of sitting. Two-member representation of the marginalized groups was observed to be in attendance during the session. Each sitting, on average started 41 minutes behind the schedule and lasted for two hours and 51 minutes, while total time of the session remained 17 hours and eight minutes. The sixth and last sitting remained the longest that consumed four hours and 12 minutes while the first sitting was the shortest that lasted for only 45 minutes.

The Speaker attended five sittings and presided over the session for 10 hours and 23 minutes (61%). The remaining proceedings of six hours and 13 minutes (36%) were chaired by Members of Panel of Chairpersons while three percent time (32 minutes) was consumed in a break during the third sitting.

The Chief Minister remained absent throughout the session while the Leader of the Opposition attended four sittings for nine hours and 34 minutes (56% of the session time).

Question Hour was held in three sittings, wherein 17 Starred Questions were taken up and responded to by the relevant ministers. In addition, lawmakers raised 11 Supplementary Questions, as well. Of total 24 Starred Questions, the House managed to take up 71 percent questions that received oral as well as written replies from the government departments. The remaining seven (29%) questions were deferred due to the absence of movers or concerned ministers.

Six reports appearing on Orders of the Day were laid in the House. These included the Second Bi-Annual Report of the National Finance Commission for January -June 2016, the Report of the committee on its visit to the Balochistan Houses located in Islamabad and Karachi, two Reports of Standing Committee on Privileges regarding addition of new sections in Assembly’s rules to introduce CAN and provisions of constituting sub-committees, the committee report on a resolution on Children Hospital, Quetta and a report of the Special Committee on admissions in Cadet College, Mastung, Pishin.

Three lawmakers belonging to PkMAP, ANP and NP moved as many Adjournment Motions (AMs) during the reporting period. The House clubbed together two AMs which were about discriminatory attitude of the law enforcement agencies against Pukhtun community during search operations in Sindh and Punjab and were converted into a resolution. The third motion regarding discriminatory attitude of the Principal of Cadet College, Mastung was withdrawn by the mover after getting assurance from the government.

The provincial Law Minister moved two motions using Rule 134 of the Assembly rules during fourth sitting, which were adopted by the House. These motions called for appointment of two lawmakers, one each of PML-N and JUI-F, to be members of three standing committees.

Lawmakers raised 60 Points of Order (POs) consuming three hours and 17 minutes of the session’s time. The highest number of POs (21) were raised during the sixth sitting which consumed an hour and 12 minutes, while four other POs consumed five minutes each of the proceedings during third and fourth sittings.

JUI-F lawmakers pointed out quorum twice during the second and fifth sittings. On both these occasions, the quorum was found incomplete and had led to early adjournment of the sittings.

Four incidents of walkout were witnessed during the third, fourth and sixth sittings that consumed as many hours of the proceedings. The first walkout of 36 minutes was staged by PkMAP, PML and PML-N lawmakers over the absence of secretaries of the government departments. During the fourth sitting, a lawmaker belonging to NP staged two-hour walkout over non-issuance of funds for his constituency, while a PkMAP lawmaker walked out of the House complaining about non-availability of medical staff in his constituency for 10 minutes. The last incident of one hour and 16 minutes’ walkout was staged by a PML-N lawmaker against the controversial appointments in a government department