Constituency-wise Data of Form-45 with Signatures by Polling Agents 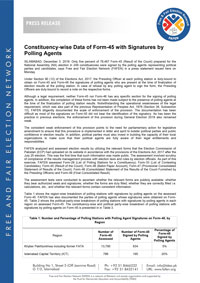 ISLAMABAD, December 3, 2018: Only five percent of 78,467 Form-45 (Result of the Count) prepared for the National Assembly (NA) election in 249 constituencies were signed by the polling agents representing political parties and candidates, says Free and Fair Election Network (FAFEN) in a press statement issued here on Monday.

Under Section 90 (12) of the Elections Act, 2017, the Presiding Officer at each polling station is duty-bound to obtain on Form-45 and Form-46 the signatures of polling agents who are present at the time of finalization of election results at the polling station. In case of refusal by any polling agent to sign the form, the Presiding Officers are duty-bound to record a note on the respective forms.

Although a legal requirement, neither Form-45 nor Form-46 has any specific section for the signing of polling agents. In addition, the completion of these forms has not been made subject to the presence of polling agents at the time of the finalization of polling station results. Notwithstanding the operational weaknesses of the legal requirement, which was also part of the previous Representation of Peoples Act, 1976 (Section 38, Subsection 13), FAFEN diligently documented the scale of enforcement of the provision. The documentation has been difficult as most of the signatures on Form-45 did not bear the identification of the signatory. As has been the practice in previous elections, the enforcement of this provision during General Election 2018 also remained weak.

The consistent weak enforcement of this provision points to the need for parliamentary action for legislative amendment to ensure that this procedure is implemented in letter and spirit to bolster political parties and public confidence in election results. In addition, political parties must also invest in building the capacity of their local organizations to make sure that their political agents are fully aware of their legal entitlements and responsibilities.

FAFEN analyzed and assessed election results by utilizing the relevant forms that the Election Commission of Pakistan (ECP) had uploaded on its website in accordance with the provisions of the Elections Act, 2017 after the July 25 election. This was the first time that such information was made public. The assessment involved scrutiny of compliance of the results management process with election laws and rules by election officials. As part of this exercise, FAFEN assessed Form-28 (List of Polling Stations for a Constituency); Form-33 (List of Contesting Candidates); Form-45 (Result of the Count); Form-46 (Ballot Paper Account); Form-47 (Provisional Consolidated Statement of Results of the Count); Form-48 (Consolidated Statement of the Results of the Count Furnished by the Presiding Officers) and Form-49 (Final Consolidated Result).