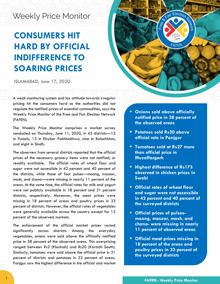 ISLAMABAD, June 17, 2020: A weak monitoring system and lax attitude towards irregular pricing hit the consumers hard as the authorities did not regulate the notified prices of essential commodities, says the Weekly Price Monitor of the Free and Fair Election Network (FAFEN).

The Weekly Price Monitor comprises a market survey conducted on Thursday, June 11, 2020, in 45 districts—15 in Punjab, 13 in Khyber Pakhtunkhwa, nine in Balochistan, and eight in Sindh.

In the meat category, mutton and beef were overpriced in 56 percent and 53 percent districts, respectively. In markets in Lahore Cantonment and Karachi South, mutton and beef were priced per kilogram at Rs500 and Rs449, respectively, more than the rates notified officially. Moreover, markets in nearly 33 percent of districts paid no heed to the official prices of chicken, Swabi reporting the highest difference of Rs173 in the market price and the official rate.

TDEA-FAFEN generates this Weekly Price Monitor covering 15 necessary kitchen items, including basic groceries such as wheat, pulses, oil, sugar, and perishable commodities like meat, and vegetables. It does this considering the need for an independent and regular assessment of the availability of such items.