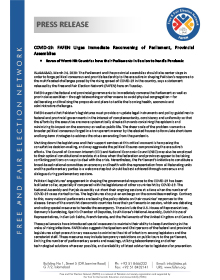 ISLAMABAD, March 24, 2020: The Parliament and the provincial assemblies should take center stage in order to forge political consensus and provide leadership to the executive in shaping Pakistan’s response to the multifaceted challenges posed by the rising spread of COVID-19 in the country, says a statement released by the Free and Fair Election Network (FAFEN) here on Tuesday.

FAFEN urges the federal and provincial governments to immediately convene the Parliament as well as provincial assemblies – through teleworking or other means to avoid physical congregation – for deliberating and finalizing the proposals and plans to tackle the looming health, economic and administrative challenges.

FAFEN asserts that Pakistan’s legislatures must provide or update legal instruments and policy guidelines to federal and provincial governments in the interest of complementarity, consistency and uniformity so that the efforts by the executive are more systematically directed towards containing the epidemic and minimizing its impact on the economy as well as public life. The sheer scale of the problem warrants a broader political consensus forged in a transparent manner by the elected houses to formulate short-term and long-term strategies to address the crises emanating from the pandemic.

Shutting down the legislatures and their support services at this critical moment is hampering the consultative decision-making, and may aggravate the political fissures compromising the executive’s efforts. The Council of Common Interest (CCI) and National Economic Council (NEC) may also be employed to their optimal constitutional mandate at a time when the federation and provinces appear to be taking conflicting positions on ways to deal with the crisis. Nevertheless, the Parliament’s initiative to constitute a broad-based national committee on economy and health with the representation from all federating units and the parliamentary parties is a welcome step but should be best achieved through consensus and dialogue during parliamentary sessions.

Pakistani legislatures’ engagement in shaping the governmental response to the COVID-19 has been lackluster so far, especially if compared with the legislatures of other countries hit by COVID-19. The National Assembly and Punjab Assembly cut short their ongoing sessions at a time when the number of COVID-19 cases started to rise. The legislatures also put an embargo on the committee meetings. Contrary to this, many national parliaments are leading the policy debate on their countries’ responses to the disease. Seven of the worst-hit democratic countries have their parliaments in session, which are debating and voting special measures to handle the emergency. These include the U.S. House of Representatives, Germany’s Bundestag, Spain’s Chamber of Deputies, South Korea’s National Assembly, Dutch House of Representatives, Indian Lok Sabha, French Senate, and the Parliaments of the United Kingdom and Canada.

These parliaments have introduced special measures to maintain their ability to keep functioning in the wake of rising infections. FAFEN also suggests the Speakers and Chairpersons of the federal and provincial legislatures adopt precautionary measures to minimize the risk of infections among legislators and the secretariat staff. These measures may include temporary restrictions on public tours to the parliament, limiting the number of parliamentary events and meetings, utilizing teleconferencing and other technological solutions wherever possible, and availability of latest advisories to legislators for prevention.