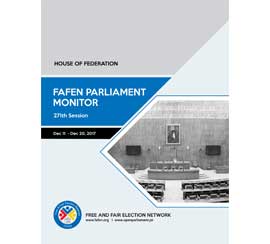 The Senate adopted five resolutions and passed four government bills, including the delimitation bill that provides for reallocation of National Assembly’s seats among the federating units, during its eight-sitting 271st session.

The Constitutional Amendment Bill 2017 was passed on December 19, 2017 after getting clearance from the National Assembly almost a month ago. The Upper House of the Parliament could not vote on the bill on November 17 when it was first tabled due to the absence of two-third lawmakers in the House which is a prerequisite to pass any constitutional amendment.

The Senate also witnessed the passage of three government bills, including the COMSATS University Islamabad Bill, 2017, the Pakistan Tobacco Board (Amendment) Bill, 2017 and the Apprenticeship Bill, 2017.

The Chair informed the House that the Prohibition of Smoking and Protection of Non-smokers Health (Amendment) Bill, 2017 had been received from the Standing Committee and was awaiting the notice under Rule 100 for its consideration.

The session comprising eight sittings continued between December 11, 2017 and December 20, 2017. With an average of 14% Senators present at the start and 15% at the end, each sitting lasted for an average three hours and 28 minutes. A maximum of 71 (68%) members, on average, attended the session with the presence of two minority Senators as well.

The parliamentary leaders of PkMAP and PPPP were observed to be present in all the sittings. The PML-N, MQM and NP leaders attended seven sittings and were followed by the leaders of PML-F, PTI, BNP-M, ANP, PML (5 each), JUI-F (3), JI (2) and BNP-A (1).

The House adopted five resolutions. In a supplementary resolution, the House rejected and condemned the unilateral announcement of US President to shift US Embassy from Tel Aviv to Jerusalem. Four other resolutions adopted by the House focused to lay all international conventions as well as treaties in the Parliament; facilitate all those persons who left Pakistan at the time of partition; demand payment of compensation from the US on account of lives lost and damages as a result of drone attacks inside Pakistan and impose ban on the sale of carbonated and energy drinks in all educational institutions established in Islamabad and cantonment areas.

Moreover, the House did not consider four resolutions while two resolutions were deferred, dropped and finally rejected.

The House took up five Calling Attention Notices (CANs) regarding artificial shortage of essential medicines, ineligibility of twelve million female voters to cast their votes, selling out key assets of PIA like hotels in New York and Paris, delay in legislation for merger of FATA with Khyber Pakhtunkhwa and non-availability of computer teachers in the federal government schools and colleges. Two CANs were not taken up while one was deferred.

The Senate held discussion on three out of 12 Motions under Rule 218 while four motions were deferred, four were not taken up and one was dropped. The discussions related to the role of Council of Common Interest in promoting harmony and building confidence between federation and federating units in the country, unviable industrial sector and matters relating to upcoming and recently established Independent Power Producers (IPPs) in the country.

The standing committees of the House presented 12 reports on various issues referred to the committees. The House granted extensions to 13 committees for presentation of their reports.

Following the motion under Rule 60, five lawmakers discussed the matter of public importance about the non-construction of new Basic Education Community Schools. Federal Ministers for Interior and Federal Education and Professional Training responded to it.

The House took up a total of nine out of 100 (9%) Starred Questions for answers during the proceedings. The Senators raised 27 supplementary questions as well. Out of 100 Starred Questions, 27 were addressed to the Ministry of Finance, 11 to ministry of Capital Administration and Development Division and nine to Commerce and Textile.

A total of 1530 Adjournment Motions appeared on the agenda during the session. The Chair admitted two of them for discussion. The House debated four of the AMs that highlighted the issues of interim award issued by London Court of International Arbitration on June 8, 2017 in favour of nine IPPs; delinking petroleum and gas authority from provincial oversight; commitments made by the government to the Islamic Military Counter Terrorism Coalition and the recent sit-in at Faizabad Interchange, Islamabad. One AM was disposed of, two each were dropped and not taken up, one was rejected by the Chair while three were withdrawn by their respective movers. A PPPP lawmaker walked out of the House for 21 minutes over non-appointment of a member of IRSA.