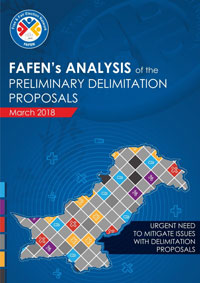 ISLAMABAD, March 16, 2018: Free and Fair Election Network (ECP) has identified varying degree of discrepancies in the population size of electoral constituencies in fresh delimitation proposals laid out by the Election Commission of Pakistan (ECP).

While ECP has upheld the legal delimitation principles of geographical compactness and respect for the existing boundaries of administrative units, the principle of equality of vote is compromised in as many as 81 National Assembly constituencies where the variation in population size exceeds the ordinarily permissible legal limit of 10%.

Election Rules, 2017 drafted and approved by ECP appeared to have been strictly adhered to but in that process legal principle of equality of vote is compromised. Rules pertaining to delimitation could not sufficiently operationalize the legal principle of equality of vote among constituencies. Law provides for equality among constituencies but Rules have attempted to follow this principle among provinces and districts.

Legally, as far as possible, variation in population of constituencies of an Assembly should not ordinarily exceed ten percent. However, the FAFEN analysis reveals that variation exceeds the limit of ±10% in as many as 81 out of 260 National Assembly constituencies which are being delimited in light of the Elections Act, 2017. The Act allows ECP to deviate from this permissible limit in only exceptional cases; however, the reasons for any such deviation must be recorded in the Delimitation Order. The ECP has used this discretionary power in case of around one-third of the constituencies being delimited which goes against the spirit of the equality of vote as stipulated in the Elections Act 2017.

FAFEN analysis of potential voting population of suggested constituencies suggests that two NA constituencies – one each in Balochistan and KP – will have less than 150,000 registered voters.

On an average, each NA constituency will potentially have more than 364,000 voters; however, the inter-constituency distribution of voters is skewed. For instance, one Member of National Assembly (MNA) each will represent 130,000 voters for NA-262 and 617,000 voters of NA-19 Haripur. As many as 73 NA constituencies will have less voters than national average of voting population per NA constituency and 85 constituencies will have voters above this average. FAFEN recommended the Election Commission of Pakistan to take the deviation from delimitation principle of capping the variation to ±10% seriously and ensure that the citizen’s right to equal representation is respected everywhere in the country.