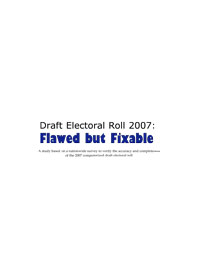 ISLAMABAD, October 17, 2010: Free and Fair Election Network (FAFEN) has withdrawn from its observation of the by-election in PS-94 due to the deteriorated security situation in Karachi over the past 24 hours, raising concerns for the safety of its observers – as well as voters — on Election Day on October 17, 2010.

FAFEN’s decision to withdraw from the election process follows standard international practice for election observation, which put the life and safety of observers foremost. FAFEN had trained 11 election observers to observe the polling process in the constituency, who were also accredited by the Election Commission of Pakistan (ECP). More than 20 target killings overnight in various parts of the city compromise the freedom of movement of FAFEN’s observers and their ability to carry out their non-partisan mandate to monitor all aspects of the election process.

Mobility of voters is also central to ensuring fairness of an electoral exercise. An environment of intimidation and fear compromises the quality and integrity of any election, as it discourages voters from participating in the democratic process, creates an unlevel playing field for candidates, and prevents observers from monitoring the fairness of the process.

There have been instances when election administrations around the world, including in Pakistan, have rescheduled elections at the last minute on grounds of insecurity. FAFEN recommends a more proactive role of the ECP in re-scheduling elections in situations where insecurity compromises voter mobility on Election Day.

FAFEN also recommends an independent role for the ECP in establishing security plans for any constituency, based on consultation with all political players. Taking appropriate action in response to security threats will inspire greater confidence in the electoral process. Provincial government and all security and intelligence agencies should follow the ECP’s instruction for all aspects of the conduct of elections and respect the ECP’s constitutional mandate.