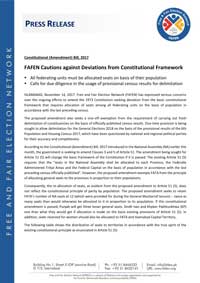 ISLAMABAD, November 14, 2017: Free and Fair Election Network (FAFEN) has expressed serious concerns over the ongoing efforts to amend the 1973 Constitution seeking deviation from the basic constitutional framework that requires allocation of seats among all federating units on the basis of population in accordance with the last preceding census.

The proposed amendment also seeks a one-off exemption from the requirement of carrying out fresh delimitation of constituencies on the basis of officially published census results. One-time provision is being sought to allow delimitation for the General Elections 2018 on the basis of the provisional results of the 6th Population and Housing Census 2017, which have been questioned by national and regional political parties for their accuracy and completeness.

According to the Constitutional (Amendment) Bill, 2017 introduced in the National Assembly (NA) earlier this month, the government is seeking to amend Clauses 3 and 5 of Article 51. The amendment being sought for Article 51 (5) will change the basic framework of the Constitution if it is passed. The existing Article 51 (5) requires that the “seats in the National Assembly shall be allocated to each Province, the Federally Administered Tribal Areas and the Federal Capital on the basis of population in accordance with the last preceding census officially published”. However, the proposed amendment exempts FATA from the principle of allocating general seats to the provinces in proportion to their populations.

Consequently, the re-allocation of seats, as evident from the proposed amendment to Article 51 (3), does not reflect the constitutional principle of parity by population. The proposed amendment seeks to retain FATA’s number of NA seats at 12 (which were provided for during the General Musharraf tenure) — twice as many seats than would otherwise be allocated to it in proportion to its population. If this constitutional amendment is passed, Punjab will get three lesser general seats, Sindh two and Khyber Pakhtunkhwa (KP) one than what they would get if allocation is made on the basis existing provisions of Article 51 (5). In addition, seats reserved for women should also be allocated to FATA and Islamabad Capital Territory.

The following table shows the distribution of seats to territories in accordance with the true spirit of the existing constitutional principle as enunciated in Article 51 (5):

Such deviations from the basic principles that bind the federation require extraordinary reasoning and justification. It would be more appropriate to reach a decision on the future of FATA – its merger with KP or status as a separate province – to address the issue of its underdevelopment/underrepresentation instead of creating deviations from the Constitution to over represent a region in the national legislature. Alternatively, specific amendments may be made in the Constitution to allow for additional seats to all under-developed areas in the country. All territories mentioned in Article 1 (2) of the Constitution need to be treated equally and proportionately.

Moreover, the constitutional amendment bill does not address the number of reserved seats to be reallocated to religious minorities in line with their share in population. While PBS must make public the population figures of non-Muslim minorities, FAFEN urges parliamentary parties to proceed with the bill only after this omission is deliberated upon and the representation of religious minorities is satisfactorily considered.