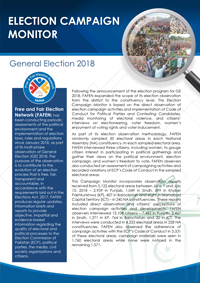 ISLAMABAD, July 20, 2018: Free and Fair Election Network (FAFEN) is observing the electoral and political environment in the country since January 2018. Following the announcement of the election program for General Election 2018, FAFEN expanded the scope of its election observation from the district to the constituency level. This Election Campaign Monitor is based on the direct observation of election campaign activities and implementation of Code of Conduct for Political Parties and Contesting Candidates, media monitoring of electoral violence, and citizens’ interviews on electioneering, voter freedom, women’s enjoyment of voting rights and voter inducement.

As part of its election observation methodology, FAFEN randomly sampled 50 electoral areas in each National Assembly (NA) constituency. In each sampled electoral area, FAFEN interviewed three citizens, including women, to gauge citizens interest in participating in political gatherings and gather their views on the political environment, election campaign, and women’s freedom to vote. FAFEN observers also conducted an assessment of campaigning activities and recorded violations of ECP’s Code of Conduct in the sampled electoral areas.

This Campaign Monitor incorporates observation reports received from 5,122 electoral areas between June 1 and July 15, 2018 – 2,959 in Punjab, 1,049 in Sindh, 699 in Khyber Pakhtunkhwa (KP), 407 in Balochistan and eight in Islamabad Capital Territory (ICT) – in 240 NA constituencies.  These reports included direct observation and citizens’ perceptions of election campaign activities and developments. FAFEN observers interviewed 12,104 citizens – 7,482 in Punjab, 2,467 in Sindh, 1,371 in KP, 764 in Balochistan and 20 in ICT. The interviews were conducted in 4,233 electoral areas in 228 NA constituencies. FAFEN also observed the adherence of campaign activities with the ECP’s Code of Conduct in 3,331 of these electoral areas; campaign materials were seen in 1,760 electoral areas while none were noticed in the remaining 1,571.