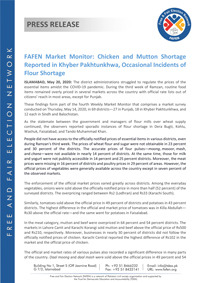 ISLAMABAD, May 20, 2020: The district administrations struggled to regulate the prices of the essential items amidst the COVID-19 pandemic. During the third week of Ramzan, routine food items remained overly priced in several markets across the country with official rate lists out of citizens’ reach in most areas, except for Punjab.

These findings form part of the fourth Weekly Market Monitor that comprises a market survey conducted on Thursday, May 14, 2020, in 69 districts—27 in Punjab, 18 in Khyber Pakhtunkhwa, and 12 each in Sindh and Balochistan.

As the stalemate between the government and managers of flour mills over wheat supply continued, the observers reported sporadic instances of flour shortage in Dera Bugti, Kohlu, Washuk, Faisalabad, and Tando Muhammad Khan.

People did not have access to the officially notified prices of essential items in various districts, even during Ramzan’s third week. The prices of wheat flour and sugar were not obtainable in 23 percent and 30 percent of the districts. The accurate prices of four pulses—moong, masoor, mash, and chana—were not available in nearly 14 percent of districts. At the same time, those for milk and yogurt were not publicly accessible in 14 percent and 25 percent districts. Moreover, the meat prices were missing in 16 percent of districts and poultry prices in 29 percent of areas. However, the official prices of vegetables were generally available across the country except in seven percent of the observed markets.

The enforcement of the official market prices varied greatly across districts. Among the everyday vegetables, onions were sold above the officially notified price in more than half (52 percent) of the surveyed districts. The overpricing ranged between Rs2 (Lodhran) and Rs33 (Karachi South).

The market rates of eggs per dozen were above the officially notified prices in 38 percent districts. At the same time, the milk and yogurt prices were higher than the official rates in 42 percent and 36 percent of the observed districts.

TDEA-FAFEN generates the weekly market monitors covering 15 essential kitchen items, including groceries such as wheat, pulses, oil, sugar, and perishable commodities like meat, and vegetables. It does this considering the need for an independent and regular assessment of the availability of such items.