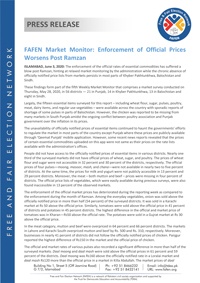 ISLAMABAD, June 3, 2020: The enforcement of the official rates of essential commodities has suffered a blow post Ramzan, hinting at relaxed market monitoring by the administration while the chronic absence of officially notified price lists from markets persists in most parts of Khyber Pakhtunkhwa, Balochistan and Sindh.

These findings form part of the fifth Weekly Market Monitor that comprises a market survey conducted on Thursday, May 28, 2020, in 56 districts — 21 in Punjab, 14 in Khyber Pakhtunkhwa, 13 in Balochistan and eight in Sindh.

Largely, the fifteen essential items surveyed for this report – including wheat flour, sugar, pulses, poultry, meat, dairy items, and regular use vegetables – were available across the country with sporadic reports of shortage of some pulses in parts of Balochistan. However, the chicken was reported to be missing from many markets in South Punjab amidst the ongoing conflict between poultry association and Punjab government over the inflation in its prices.

The unavailability of officially notified prices of essential items continued to haunt the governments’ efforts to regulate the market in most parts of the country except Punjab where these prices are publicly available through ‘Qeemat Punjab’ mobile application. However, some recent news reports revealed that the prices of certain essential commodities uploaded on this app were not same as their prices on the rate lists available with the administration’s offices.

In the meat category, mutton and beef were overpriced in 64 percent and 66 percent districts. The markets in Lahore and Karachi South overpriced mutton and beef by Rs. 500 and Rs. 310, respectively. Moreover, businesses in nearly 41 percent of districts did not follow the officially notified prices of chicken. Panjgur reported the highest difference of Rs150 in the market and the official price of chicken.

The market rates of eggs per dozen were above the officially notified prices in 34 percent districts. At the same time, the milk and yogurt prices were higher than the official rates in 45 percent and 34 percent of the observed districts.

TDEA-FAFEN generates the weekly market monitor covering 15 essential kitchen items, including groceries such as wheat, pulses, oil, sugar, and perishable commodities like meat, and vegetables. It does this considering the need for an independent and regular assessment of the availability of such items.

The observers obtained the official prices from the officials of district administrations, or market committees, and collected the wholesale prices through market surveys. In the case of Punjab, the government price app ‘Qeemat Punjab’ was also used to fetch the official rates.