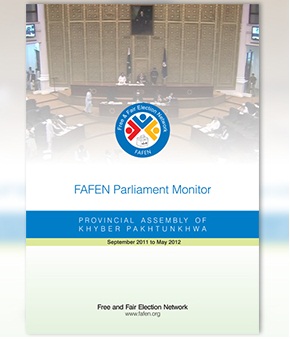 In the backdrop of frayed US-Pakistan relations, internal security challenges, ethnolinguistic tensions, and the energy crisis, the Khyber Pakhtunkhwa Assembly met for 41 sittings (six sessions) between September 2011 and May 2012.

The Assembly remained strangely silent on the suspension of NATO supply lines in November 2011 as a result of a NATO attack on the Salala check-post in Mohmand Agency, leading to the deaths of 24 Pakistani soldiers. Tensions between ethnolinguistic groups within the provincial borders and the energy crisis were addressed on the floor of the House. However, focus on these issues was fleeting as they were addressed through only three agenda items comprising a bill for the promotion of all regional languages in the province, and two resolutions regarding load shedding and issuance of correct electricity bills. More than a year after the 18th amendment, which at long last saw the renaming of the province and decentralization of power through the devolution of subjects such as health and education, only minor changes in the legislative status quo of the region were observed.

On a brighter note, female legislators were observed to be actively vocal and tabled various agenda items on women rights. Additionally, reflecting trends at the federal level, a private member’s bill on the agenda was passed – a welcome change from the mostly treasury-driven legislative business in the past.

Tabled by a female PPPP legislator, the passage of the Khyber Pakhtunkhwa Enforcement of Women Ownership Rights Bill 2011 safeguards women’s right to own property. Similarly a resolution regarding maternal health are a proof of the attention given to women-related issues in the assembly and the active participation of its 22 women legislators who are 18% of the total membership of the house.

In light of ethno-linguistic tensions in the province erupting after the passage of the 18th amendment in the Hazara region and to a lesser extent in Chitral and the Derajat, the Assembly passed the Khyber Pakhtunkhwa Regional Languages Authority Bill 2011 to preserve, promote and teach indigenous languages of the province, including Pashto, Hindko, Khowar, Seraiki, and Kohistani etc.

The energy crisis was discussed through one resolution against unscheduled loadshedding, and another demanding the management of Peshawer Electric Supply Company (PESCO) to issue correct electricity bills. A legislator also drew attention to the under-construction Diamer Bhasha Dam in Gilgit Baltistan, expected to control flood damage, extend the life of the Tarbela Dam, store an appreciable amount of water for irrigation and drinking, and generate electricity.

The two government bills proposing to establish universities in Haripur and Charsadda were withdrawn after they were tabled in the house. The withdrawal is indicative of a lack of seriousness towards the education sector, since ordinances remain valid for only three months and need to be passed as bills in the assembly. On the other hand, members drew the house’s attention towards the education sector through 13 call attention notices. An adjournment motion (one of seven moved during the year) condemning the US congressional hearing against alleged human rights abuses among other issues in Balochistan was taken up by the house. This was the only instance of members tabling