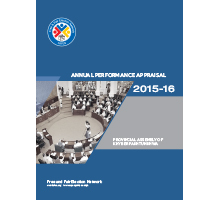 The Provincial Assembly of Khyber Pakhtunkhwa passed 24 government as well as three private member bills and adopted 38 resolutions during its third parliamentary year that comprised four sessions, starting from May 29, 2015 and ending on May 28, 2016. The House fulfilled the Constitutional requirement of meeting not less than 100 days in a year as per Article 127 of the Constitution.

In actual, the House held 51 sittings, consuming 56 hours and 22 minutes with an average delay of 29 minutes per session. The proceedings remained suspended for seven hours and nine minutes due to breaks that consumed 13 percent of the total sessions’ time.

FAFEN classifies members’ participation in three categories; members submitting agenda on the List of Business; those participating in on-floor debates and lawmakers taking part in both these activities.

Male lawmakers remained more active in terms of submitting agenda items, taking part in debates or doing both activities as compared to their female counterparts. Seventy-seven out of 101 male lawmakers (76%) took part in the proceedings while the participation of women legislators was recorded at 64 % as 14 out of 22 female lawmakers took part in various parliamentary interventions.

A total of 32 (26%) lawmakers remained inactive and did not take part in any of the activities on the floor of the House. The break-up of members’ list who remained inactive during the proceedings was PTI (21) followed by QWP-S & AJIP (3 each), PML-N (2) and JUI-F (one). In addition, two independent legislators also remained mum during the reporting period.

PTI-led government in Khyber Pakhtunkhwa passed seven new legislations while the House proposed to amend 20 existing laws during the reporting period. Despite Finance bill, the passed legislations were mostly related to the issues of rule of law, citizen’s rights and access to justice, local government, education, health, economy and civil and labour rights.

The landmark legislation by the Provincial Assembly during the parliamentary year was the passage of laws related to establishment of Civil Mobile Courts and Heath Foundation.

Four private member bills were introduced during the period. Three were passed – proposing amendment in the existing laws – indicating the balance between treasury and opposition benches in terms of opportunities for legislation.

The Provincial Assembly of Khyber Pakhtunkhwa adopted 38 resolutions during the third parliamentary year. A total of 41 resolutions appeared on the list of business during the reporting period. Of these 38 were adopted; one remained pending and one was lapsed due to the absence of mover. The House also referred one resolution to the relevant standing committee for further deliberations.

As many as 46 lawmakers (37%) performed government oversight by raising 965 Starred Questions during the last parliamentary year. Of these, 848 questions were lapsed due to the prorogation of session, 33 due to movers’ absence, 66 received government’s reply, 10 referred to the standing committees and four each were withdrawn by the movers and deferred by the House, respectively.

A total of 57 CANs appeared on the “Orders of the Day” during the reporting period. Among these, 39 were taken up by the House and 11 left unaddressed. The remaining six notices were lapsed while one notice was referred to the relevant committee for further deliberations.

A total of eight Adjournment Motions appeared on the agenda during the third parliamentary year. Of these three were admitted for discussion, one each was debated, deferred and referred to relevant standing committee. The House, however, did not take up two other motions.

Through these AMs, the lawmakers requested the Chair to defer regular business of the House and discuss issues related to natural disaster, including earthquake and flood, distribution of resources in the province and prevailing law and order in Khyber Pakhtunkhwa.

As many as 13 questions of privilege were moved by 11 lawmakers during the third parliamentary year. Of these, eight were referred to the committee; two got lapsed while one was withdrawn by the mover. One question of privilege was rejected by the Chair while another was not taken up by the House.

Lawmakers pointed out quorum 10 times during four sessions of the third parliamentary year that led to the adjournment of sitting nine times while the quorum was ignored once by the Chair.

Lawmakers belonging to PTI pointed out quorum five times during the reporting period, followed by PPPP and JUI-F (2 each) and PML-N (one). On six occasions the Chair adjourned the sitting for some time (63 minutes in three cases) while on three other occasions, the Speaker adjourned the proceedings for the next sitting. However, on one occasion, the Chair ignored the quorum when pointed out by a female lawmaker belonging to PML-N.

The conduct of members in the House shows their determination towards the representative role assigned to them by the Constitution.

During third parliamentary year, the Khyber Pakhtunkhwa Assembly witnessed five incidents of walkout, consuming 119 minutes of the proceedings. In addition, one incident each of protest and boycott consumed 10 and three minutes of the sitting respectively.

The first instance of disorder was observed during 15th session when the entire opposition walked out of the House for 15 minutes against the ministerial absence. On second instance, the PML-N, JUI-F and ANP lawmakers staged a walk out against the absence of relevant authorities for answering questions appearing on the agenda. However, the elected representatives came back to the House after 68 minutes.

The members of ANP, PML-N and PPPP staged a two-minute walk out against the attitude of Chair for not admitting a Privilege Motion of their JUI-F alliance member.

A PPPP male lawmaker walked out of the House for not getting permission to speak on a point of order that consumed 19 minutes of the proceedings. While, the non-construction of a demolished bridge in Dir despite allocation of funds led the entire opposition to stage fifth walk out of the parliamentary year, consuming 15 minutes of the sitting time.

In the meantime, a JUI-F legislator boycotted the proceedings for three minutes against the non-compliance of Speaker’s ruling on suspension of a police officer for breaching lawmaker’s privilege. Protest by Opposition consumed 10 minutes of the sitting which was against the late start of the proceedings.

A total of 41 Points of Order (POs) were raised by lawmakers during the year consuming 207 minutes of the proceedings.  Lawmakers raised 28 Points of Order on governance followed by Business of the House (8), Prayers and Tributes (2) and one each related to Democracy and Political Development, Foreign Relations and Finance and Economic Policy.