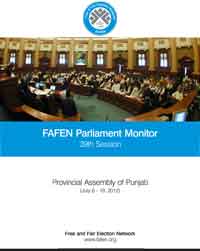 The 39th session of the Punjab Assembly – the largest legislature in the country with a membership of 371 – was marked by the disinterest and disengagement of MPAs. The House passed 11 bills amid low attendance. Persistent lack of quorum was observed in all the four sittings. In the House of 371, on average only 21 members were present at the beginning and 38 at the end of each sitting.

The short session from July 16 and 19, 2012 lasted nine hours and 30 minutes with each sitting lasting, on average, two hours and 22 minutes. Each sitting was delayed on average by 155 minutes. Only 20% of the members – 47 male and 27 female – participated in the session by submitting agenda items on the orders of the day or by taking part in debates. Male MPAs appeared to be less active than their female counter parts. Their participation remained 16% of their total membership of 296 while female participation was 36% of their total membership of 751.

The Chief Minister remained absent throughout the session. However, his counterpart, the Leader of the Opposition, attended one sitting for 35 minutes. The Speaker chaired 91% of the session time, while the remaining 9% was presided over by members of panel of chairpersons.

While the attendance of members remained low, the assembly managed to pass 11 bills. Seven bills which were earlier passed by the House had been returned by the Governor under article 116 of the constitution for reconsideration by the legislature. Under Article 113 of the constitution the House re-approved the bills and sent them back to the Governor. If within ten days, the Governor does not give assent to the bills, they automatically become laws.

Moved by a PMLN member, the single private member bill – the Provincial Assembly of the Punjab Privileges (Amendment) Bill 2009 – appearing on the orders of the day was not taken up by the House. It was regarding the raise in penalty for causing disruptions on the Punjab Assembly premises from Rs 1,000 (stipulated in 1972) to Rs 20,000.

Additionally, the House adopted a resolution acknowledging the services of group captain Cecil Chaudhry and urging Pakistan Air Force to name a base after the late war hero.

Two calling attention notices about a killing of a citizen over a property dispute in Lahore, and an abduction and murder of a Rawalpindi resident were taken up by the House.

Among other agenda items, 17 adjournment motions on traffic, shortage of water in Punjab, schools’ closure and other issues were raised during the session.

Speeches by members and treasury rejoinders on points of order took 18% of the total session time, dipping into the time otherwise allocated for agenda items on the order of the day. Unless the chair gives a formal ruling on a point of order, speeches and rejoinders do not contribute to any assembly output and only provide media with news pegs.

The House witnessed a single protest during the session. In the third sitting a PMLN member staged a walkout as his adjournment motions were not taken up.