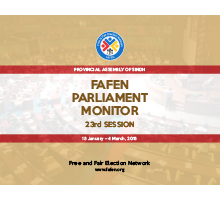 The House passed eight bills during the session including seven treasury backed bills and one private member’s bill, five of which were new legislations and three were amendments in the existing laws.

Six bills appearing on the list of business were not taken up and one each was rejected, deferred and referred to the relevant standing committee.

The current session was marked by low attendance of lawmakers as an average of 28 (17%) members remained present in the start and 54 (32%) at the end of each sitting. Four minority members, on average, attended each sitting of the session. On average, each sitting started 72 minutes behind the schedule and lasted three hours and 48 minutes. The longest sitting on February 4, 2016 lasted 5 hours and 29 minutes and the shortest sitting lasting 155 minutes was witnessed on February 1, 2016.

The House adopted a total of 21 out of 31 resolutions appearing on the ‘Orders of the Day’ during the session. Of 31 tabled resolutions, eight were jointly tabled by members while the remaining resolutions were tabled individually by members belonging to different parties. MQM tabled 18 resolutions followed by PPPP (9), PML-F (3) and PTI (1).

Of the 21 adopted resolutions, five each were on the issues of good governance, health, tributes and condemnation followed by Education (4) and Telecommunication and Petroleum sector (one each).

The lawmakers raised 70 Calling Attention Notices (CANs) during the session of which 53 were taken up and responded to by the relevant Ministers on floor of the House and the remaining 17 CANs were left unaddressed by the House.

Among responded CANs, 19 were addressed to Local Government followed by Education and Literature (7), Health Department (5), Home Department; Work and Services; Services General Administration Department (3 each), Irrigation and STEVTA (2 each) and one each was related to Transport, Social Welfare, Agriculture, Labour, Culture, Excise & Taxation, Education & Literacy and Parliamentary Affairs, Revenue and Food department.

Members raised 139 questions from different departments out of which 78 starred questions were taken up on the floor of the House and responded to by the relevant Ministers. As many as 61 starred questions that appeared on the agenda were left unaddressed by the House due to absence of government representatives or their movers. Members also asked 419 supplementary questions during different sittings of the session.

Lawmakers raised 313 Points of Order (POs) that consumed 416 minutes of the session time.  The highest numbers of POs (18) were raised during 21st sitting consuming 55 minutes of proceeding while the minimum three POs were raised during 19th sitting that consumed five minutes of the sitting time. Moreover, 16 adjournment motions appeared on the list of business during the session of which nine were rejected by Chair, two were withdrawn by the movers and five were not taken up by the House. Private members submitted 18 motions that appeared on the list of agenda but not taken up by the House during the session.

Among the remaining 57 non-participating members 41 belonged to PPPP followed by MQM (8), PML-N (4), and PML-F (3). The only member in the House belonging to NPP also remained inactive during the session.

The House witnessed the presentation of six reports while two reports were granted extension. Reports presented before the House included the Quarterly Report on Receipt of Province; the Second Biannually Monitoring Report on the Implementation of National Finance Commission (NFC); the Quarterly Report of Assembly on Receipt of the Province Current Expenditure; the Assembly Appropriation Accounts Report of the Government of Sindh for 2012-13, and two Audit Reports on the accounts of various government departments for different audit years.

The main cause behind these protests and walkouts by opposition benches were attitude of the Chair for disallowing their adjournment motions, privilege motions, calling attention notices, passing unwarranted remarks against the members of the House, denial to raise the points of order by members and unsatisfactory answers to their questions by representatives of public departments during question hour.

Additionally, lawmakers raised 13 Questions of Privilege during the session. Four were rejected by the Chair, three were withdrawn by the movers, one was disposed of and the remaining one was referred to the relevant standing committee for further discussion. Four privilege motions that appeared on the agenda during the session were not taken up by the House.