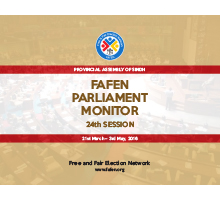 The Sindh Assembly passed 13 bills and adopted nine resolutions during its 24th session, says Free and Fair Election Network in its session report based on direct observation of proceedings of the Sindh Assembly.

Out of 16 bills on list of business during the session, the House passed 13 government bills of which seven were about new legislation and six bills sought amendments in the existing laws.  A government bill- the Societies Registration (Sindh Amendment) Bill, 2015 – was not taken up the House.

The session, comprising seventeen sittings, started on March 21 and concluded on May 3, 2016. It was marked by low attendance of lawmakers as an average of 32 (20%) members remained present at the outset and 53 (33%) at the end of each sitting. Three minority members, on average, attended each sitting of the session. On average, each sitting started 65 minutes behind the schedule and lasted two hours and 28 minutes. The longest sitting on April 26 lasted four hours and 23 minutes and the shortest sitting for only two minutes was held on May 25, 2016.

The House adopted a total of nine out of 21 resolutions appearing on the ‘Orders of the Day’ during the session. Among adopted resolutions, four were on the issues of governance followed by education sector, tributes and condolence (two each), and one on the issue of energy.

The lawmakers raised 39 Calling Attention Notices (CANs) during the session of which 32 were taken up and responded to by the relevant Ministers on floor of the House and the remaining seven CANs were left unaddressed.

Among responded CANs, 12 were addressed to Local Government followed by Health Department; Home Department (five each), Education and Literature (3), and one each was related to Excise and Taxation, Finance Department, Revenue Department, Services and General Administration Department, Transport, Wildlife and Works and Services Departments.

The House witnessed the presentation of eight reports while four reports were granted extension by the House during the session. A report on the appropriation accounts of provincial department was referred to relevant standing committee while two other reports of the standing committees on bills that appeared on the list of business were not taken up by the House during the aforementioned period.

Reports laid before the House included four recommendation reports of the standing committees on legislations, a report about action taken by various provincial departments on the resolutions passed by the House from 2013 to 2016, one audit report and a quarterly report on receipts of province current revenue, capital and development expenditures during 2015-16.

Lawmakers submitted six privilege motions during the session of which one was rejected and as many was referred to the relevant standing committee. From the remaining motions two were withdrawn by the movers while another two were not taken up by the House.