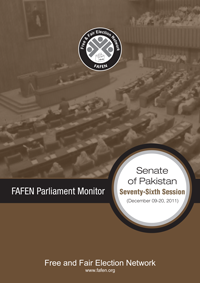 Islamabad, December 25, 2011: After successfully observing the proceedings of the National Assembly, FAFEN has started observation of the provincial assemblies – Sindh, Punjab, Khyber Pakhtunkhwa and Balochistan – and the Senate. This report is based on FAFEN’s direct observation of the 76 session of the Senate, which was held between December 9- 20, 2011.

The proceedings are observed using a robust methodology based on the rules of procedures and business. The observers collect information on all major types of parliamentary business on a standardized checklist. The data gathered is analyzed together with that acquired from other parliamentary sources to prepare session-wise reports.

FAFEN has also started releasing daily factsheets on the proceedings of the Senate. These are released the same day the sittings are held to provide media and other interested stakeholders vital statistics to encourage informed public discourse on the performance of the House.

During the 76 session, the Upper House met for 13 hours and 36 minutes, an average of an hour and 57 minutes each day. Each sitting was delayed, on an average, by 37 minutes.

The attendance of Senators was observed to be low, with an average 13 Senators present at the outset and 25 at the end of the each sitting. The Leader of the House attended the entire session while the Leader of the Opposition was present in three sittings. The Chairman attended one sitting while the Deputy Chairman was present in six. The Parliamentary Leader of PPPS did not attend any sitting but those of PkMAP and PMLN attended seven each, ANP six, PML, MQM, NP, JI and PMLF five each, and JWP and BNPA leaders attended one sitting each.

The House passed two Government Bills and Private Members’ bills each. Only 32 (18%) out of 176 Starred Questions (requiring oral answers) were put up and responded to by the relevant ministries. The Question Hour could not be held during the 4th sitting due to the absence of ministers.

One out of two Calling Attention Notices which appeared on the Agenda was taken up by the House. Moved by an ANP Senator, the CAN regarding the missing NATO containers was directed to the Ministry of Finance, Revenue, Planning and Development.

The House witnessed four walkouts and a protest during the 76 session. The ANP Senators walked out of the House twice protesting over the mention of Khyber Pakhtunkhwa as KPK in official documents, and over not being allowed to discuss matters related to the Director General of ISI in the House. Senators from FATA staged a walkout over the unavailability of utility stores in their areas. During the 3 sitting, all the Senators – treasury and opposition – protested over the absence of ministers. The PkMAP, PMLN and ANP staged a walkout on the same issue during the 6 sitting.