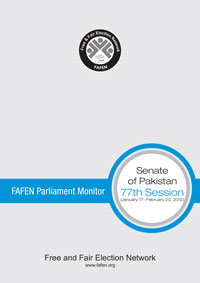 The attendance of Senators was observed to be low, with an average 12 Members present at the outset and 19 at the end of each sitting.

The House passed three Government Bills while two Private Members’ Bills were introduced. Only 154 (52%) out of 296 Starred questions (requiring oral answers) were put up and responded to by the relevant ministries. The Question Hour was not held during the 10th sitting.

The number of Points of Order raised during the session was 168. Most issues raised by the Senators pertained to Balochistan (41), business of the house and health (18 each) and corruption issues (15). None of the Points of Order attracted the formal ruling of the Chair. Unless the Chair gives a formal ruling on a Point of Order, it does not lead to any output. Four CANs were raised during the session with one on increase in rate of illiteracy being sent to the Ministry of Professional and Technical Training and another related to import of automatic weapons directed to the Ministry of Finance and Revenue.

Similarly, two others about non-construction of a bridge washed away by floods and the Capital Development Authority’s failure to complete development work in Sector E-12 in Islamabad were sent to the Ministry of Communications and the Cabinet Secretariat respectively.

The Upper House witnessed four walkouts and two protests. The ANP Senators walked out for not getting permission to speak on the adopted Resolution calling for registration of a case against former President General (Retd) Pervez Musharraf under Article 6 of the constitution. On the other hand, Senators representing JIP and JUIF staged a walkout against drone attacks while those from PMLN, JUI, ANP, MQM and JIP jointly walked out to protest increase in prices of petroleum products. Another JIP Senator walked out in protest over longer duration of the session.

All Senators protested the murder of the family members of a Member of Balochistan Assembly and the absence of relevant ministers.