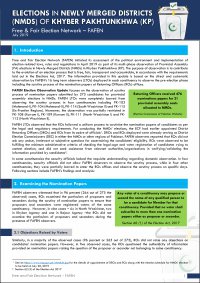 ISLAMABAD, July 3, 2019: Free and Fair Election Network (FAFEN) released a report on the scrutiny of nominated candidates for provincial assembly elections in the newly merged districts (NMDs) of Khyber Pakhtunkhwa (KP) on Wednesday. The report is based on the information gathered systematically by FAFEN Long Term Observers (LTOs) at the Returning Officers’ (ROs) offices between May 13 and May 18, 2019 to observe the scrutiny of 476 candidates nominated for elections in 21 Provincial Assembly (PA) seats – 16 General Seats, four reserved for Women, and one for non-Muslim. FAFEN’s trained, non-partisan LTOs were allowed to observe the scrutiny process of 275 nominated candidates.

FAFEN initiated its assessment of the political environment and implementation of election-related laws, rules and regulations in April 2019 as part of its multi-phase observation of PA elections in NMDs. The purpose of observation is to contribute to the evolution of an election process that is free, fair, transparent and accountable, in accordance with the requirements laid out in the Elections Act, 2017.