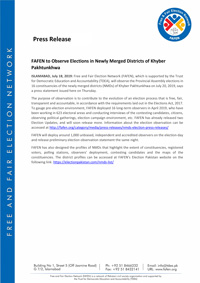 ISLAMABAD, July 18, 2019: Free and Fair Election Network (FAFEN), which is supported by the Trust for Democratic Education and Accountability (TDEA), will observe the Provincial Assembly elections in 16 constituencies of the newly merged districts (NMDs) of Khyber Pakhtunkhwa on July 20, 2019, says a press statement issued here on Thursday.

The purpose of observation is to contribute to the evolution of an election process that is free, fair, transparent and accountable, in accordance with the requirements laid out in the Elections Act, 2017. To gauge pre-election environment, FAFEN deployed 16 long-term observers in April 2019, who have been working in 663 electoral areas and conducting interviews of the contesting candidates, citizens, observing political gatherings, election campaign environment, etc. FAFEN has already released two Election Updates, and will soon release more. Information about the election observation can be accessed at https://fafen.org/category/media/press-releases/nmds-election-press-releases/

FAFEN will deploy around 1,000 unbiased, independent and accredited observers on the election-day and release preliminary election observation statement the same night.

FAFEN has also designed the profiles of NMDs that highlight the extent of constituencies, registered voters, polling stations, observers’ deployment, contesting candidates and the maps of the constituencies. The district profiles can be accessed at FAFEN’s Election Pakistan website on the following link: https://electionpakistan.com/nmds-list/