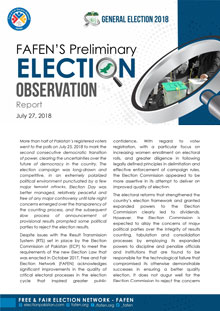 ISLAMABAD, July 27, 2018: More than half of Pakistan’s registered voters went to the polls on July 25, 2018 to mark the second consecutive democratic transition of power, clearing the uncertainties over the future of democracy in the country. The election campaign was long-drawn and competitive, in an extremely polarized political environment punctuated by a few major terrorist attacks. Election Day was better managed, relatively peaceful and free of any major controversy until late night concerns emerged over the transparency of the counting process, and the subsequent slow process of announcement of provisional results prompted some political parties to reject the election results.

Despite issues with the Result Transmission System (RTS) set in place by the Election Commission of Pakistan (ECP) to meet the requirements of the new Election Law that was enacted in October 2017, Free and Fair Election Network (FAFEN) acknowledges significant improvements in the quality of critical electoral processes in the election cycle that inspired greater public confidence. With regard to voter registration, with a particular focus on increasing women enrollment on electoral rolls, and greater diligence in following legally defined principles in delimitation and effective enforcement of campaign rules, the Election Commission appeared to be more assertive in its attempt to deliver an improved quality of election.

The electoral reforms that strengthened the country’s election framework and granted expanded powers to the Election Commission clearly led to dividends. However, the Election Commission is expected to allay the concerns of major political parties over the integrity of results counting, tabulation and consolidation processes by employing its expanded powers to discipline and penalize officials and institutions that are found to be responsible for the technological failure that compromised its otherwise demonstrable successes in ensuring a better quality election. It does not augur well for the Election Commission to reject the concerns of major political parties (PPPP, PML-N, NP, MMA, ANP, PSP, MQM, etc.) without conducting an enquiry into the matter, as otherwise the country may spiral into phase of political and public protest and outcry that inhibits political stability.

The Election Commission oversaw an unprecedented deployment of government employees on election duties. For the first time, the Commission deployed independent Returning Officers (849) for all National and Provincial Assembly constituencies, which initially caused some procedural issues, such as in the finalization of polling schemes, but were timely addressed by the ECP. As many as 811,491 personnel to be deputed for Election Day duties were trained to perform functions as Presiding Officers, Assistant Presiding Officers and Polling Officers at 85,317 polling stations with 242,088 polling booths that were setup in 272 National and 577 Provincial Assembly constituencies.

The deployment of as many as 371,000 armed forces personnel on election duties, despite questions from some political parties, ensured the peaceful conduct of Election Day amid heightened threats of subversive acts following the death of more than 150 people including two election candidates in separate suicide attacks in Peshawar, Dera Ismail (DI) Khan and Mastung. Four persons including three personnel of armed forces lost their lives in an attack near the border with Iran in Balochistan’s Kech district. Multiple ambushes against another election candidate in Bannu in Khyber Pakhtunkhwa (KP) only added to the public scare.

With massive deployment of armed forces alongside police and other law enforcement agencies, people felt reassured and came out to vote in large numbers. Except for the unfortunate deaths of 31 people in a blast outside a polling station in Quetta and a killing of one political party worker in an armed clash with rivals in Swabi, the Election Day only witnessed a few minor incidents of verbal or physical brawls that were contained by the security forces.

The voting process on Election Day generally remained smooth. However, FAFEN observers reported at least one instance of procedural irregularity at one-third of 37,001 polling stations from where Election Day observation reports have been received. Many of these irregularities may not have a material effect on the election outcome. Nevertheless, the Election Commission will do well to continue to strengthen its enforcement of electoral law and regulations by ensuring greater diligence by polling officials deployed for election duties.

The male turnout in these 241 constituencies was 58.3 percent, more than 10 percent higher than the female turnout that remained 47 percent. In absolute number, 49.48 million voters in these 241 constituencies exercised their right to vote as against 46.9 million who voted in 2013. The turnout may vary slightly when the Election Commission has provided the final consolidated results that includes postal ballots of all 270 constituencies and also final determination on ballot papers rejected from the count at the polling station-level on July 25.

Interestingly, 35 National Assembly constituencies with a close race has rejected votes greater than the margin of victory – 24 in Punjab, six in KP, four in Sindh and one in Balochistan. It is essential for Election Commission to ensure that the Returning Officers diligently review the ballots excluded from the count at the polling station level in these constituencies during the consolidation proceedings.

There are at least two National Assembly constituencies where, according to the provisional result, the women’s voter turnout was below 10 percent of the polled votes – NA-10 (Shangla) and NA-48 (North Waziristan Agency). Under the provisions of the new Elections Act, where the turnout is below 10 percent of the polled votes after the consolidation of results, the Election Commission has the power to declare the elections in these constituencies null and void and to conduct a re-poll in one or more polling stations or the entire constituency.

The preliminary comments that FAFEN has shared today reflect the findings of its observers from around the country. However, these observer reports continue to arrive at the FAFEN Secretariat, and aggregation and analysis of all of their observation data is not yet complete. FAFEN will issue subsequent reports with more detailed analysis based on the reports of all observers.

FAFEN takes this opportunity to commend Pakistani voters, the Election Commission of Pakistan (ECP) and all of the individuals involved in administering, monitoring and maintaining security during the elections. FAFEN also expresses its condolences for the loss of life and injuries suffered in Mastung, Quetta, Peshawar, and DI Khan and elsewhere during incidents of pre-election and election-day violence.

As only the second transition from one full-term civilian government to another – and the first held under the newly consolidated and improved Election Law, 2017 – General Elections 2018 represent a critical moment for democracy in Pakistan. The people of Pakistan have many reasons to be proud of these elections. Some aspects of the pre-election environment and the vote counting process, however, present cause for concern that should be addressed.

Eligible voters were allowed to vote in almost all polling stations observed except for 344 polling stations where FAFEN observers reported at least one instance of registered voters being turned away by polling staff despite having their NICs. Such instances were reported from 193 polling stations in Punjab, 99 in Sindh, 31 in KP, 12 in Islamabad and nine in Balochistan. Polling staff strictly adhered to the legal requirement of allowing only those voters to cast their ballot who were in possession of their original NIC. However, FAFEN observers reported at least one instance of voters being allowed to vote who did not have their NICs but were carrying other identity documents (such as a coloured copy of NIC, passport, etc.) at 401 polling stations – 260 in Punjab, 68 in KP, 61 in Sindh, nine in Islamabad and three in Balochistan.

As a result of improved training of election officials conducted by the Election Commission, the procedural irregularities in ballot processing that FAFEN had observed and reported in previous elections appear to have reduced. FAFEN observers reported at least one instance of an Assistant Presiding Officer not signing on the backs of ballot papers before issuing them to voters at 814 of 37,001 observed polling stations – 496 in Punjab, 195 in Sindh, 91 in KP, 23 in Balochistan and nine in Islamabad. Such ballot papers are excluded from the count under the provisions of the Election Law, even if the voter has legally acquired and marked the ballot with his/her choice.

The Election Commission has taken extraordinary measures over the last few years to address the concerns of Persons with Disabilities (PWDs) particularly under the aegis of its Gender and Disability Working Group. The new law also includes specific provisions to enhance electoral and political participation of PWDs alongside other marginalized groups including minorities, transgender persons and women. In addition to allowing PWDs the facility of postal ballot, the law also requires polling staff to allow PWDs a companion of their choice to escort them behind the secrecy screen to help them mark their ballot, provided the companion has his/her original NIC. However, the requirement was violated at 1,403 polling stations – 964 in Punjab, 222 in Sindh, 165 in KP, 31 in Balochistan and 21 in Islamabad.

While some PWDs were not allowed to seek help from a companion of their choice behind the secrecy screen, FAFEN observers reported at least one instance of unauthorized persons escorting able voters behind the secrecy screen at 2,370 polling stations – 1,774 in Punjab, 312 in KP, 233 in Sindh, 27 in Islamabad and 24 in Balochistan. Although at a much smaller scale, instances of polling agents marking ballot papers in place of voters were observed at 209 polling stations – 117 in Punjab, 45 in KP, 38 in Sindh, eight in Balochistan and one in Islamabad. Such practices have continued to persist and may only be deterred if polling officials at such polling stations are penalized. The Election Commission may employ CCTV footage, wherever available, in an effort to identify the responsible polling staff at polling stations where such irregularities were observed.

The security personnel were observed at 1,335 polling stations attempting to stop polling agents from any irregularity instead of informing the Presiding Officers, as required by their Code of Conduct. Although reported from a small fraction of the 37,001 polling stations observed, such practices indicate the need for greater investments in the training of security staff to ensure uniformity in the enforcement of electoral laws and regulations.

While the Election Commission has made a concession to political parties to set up their camps beyond a radius of 100 meters outside polling stations in urban areas as against the 400 meters requirement specified in the Elections Act, 2017, there was strict prohibition on the campaign material of political parties inside any polling station. Presiding Officers are legally required to remove any such material before the start of polling. However, FAFEN observers spotted campaign materials inside 1,539 polling stations – 968 in Punjab, 281 in KP, 213 in Sindh, 46 in Balochistan and 31 in Islamabad. Despite a ban on polling agents exhibiting or wearing anything containing their political party symbol, flag and/or picture of the candidate, the practice appeared to be common across the country undeterred. Political party symbols or flag flags were generally printed on voter chits bearing the serial number on electoral rolls and electoral block code of voters.