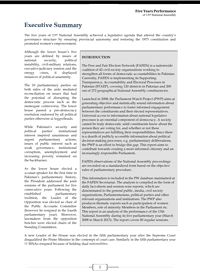 The five years of 13th National Assembly achieved a legislative agenda that altered the country’s governance structure by ensuring provincial autonomy and restoring the 1973 constitution and promoted women’s empowerment.

Although the lower house’s five years are defined by issues of national security, political instability, civil-military relations, executive-judiciary tension and the energy crises, it displayed instances of political unanimity.

The 10 parliamentary parties on both sides of the aisle mediated reconciliation on issues that had the potential of disrupting the democratic process such as the memogate controversy. The lower house passed a pro-democracy resolution endorsed by all political parties otherwise at loggerheads.

As the lower house elected a woman speaker for the first time in Pakistan’s parliamentary history, the President addressed the joint sessions of the parliament for five consecutive years. Following the established parliamentary tradition, the Leader of the Opposition was elected as chair of the Public Accounts Committee (however he resigned in the fourth parliamentary year). Moreover, lawmakers from the opposition benches were elected chairs of the Standing Committees.

These included the 18th and 20th constitutional amendments, which helped restored the 1973 constitution, ensured provincial autonomy and gave Pakistan a consensus mechanism for civilian transfer of power democratically, besides the formation of the full five-member Election Commission of Pakistan. The 12th National Assembly had passed 51 bills during its five-year term.

The National Assembly stands out for pro-women legislation, passing treasury and private members’ bills against domestic violence, harassment at workplace and public places, anti-women practices, and elevating the status of the commission on women.

These included the 18th and 20th constitutional amendments, which helped restored the 1973 constitution, ensured provincial autonomy and gave Pakistan a consensus mechanism for civilian transfer of power democratically, besides the formation of the full five-member Election Commission of Pakistan. The 12th National Assembly had passed 51 bills during its five-year term.

The National Assembly stands out for pro-women legislation, passing treasury and private members’ bills against domestic violence, harassment at workplace and public places, anti-women practices, and elevating the status of the commission on women.

The National Assembly failed to enact a new law on accountability despite the government introducing the National Accountability Act in October 2012. Amid the judicial-executive tussle over implementing the Supreme Court’s judgment in the NRO case, the lower house quickly passed the Contempt of Court Bill in the fifth parliamentary year. However it was declared null and void by the Supreme Court.

Unlike the past assemblies, the 13th National Assembly witnessed the healthy trend of passing the private members’ bills.

Overall 189 private members bills were introduced in the lower house, with 135 seeking amendments in the existing laws. Of them 18 bills were passed. PPPP lawmakers introduced the most – 62 or 33% – of the private members’ bills, followed by 53 each by PMLN and PML legislators.

In the five parliamentary years, 216 legislators asked 16,056 questions on the floor of the house, on average 3,211questions every year. The government fully responded to 12,623 questions, with 3,357 queries remaining ignored, 68 receiving partial answers, while six questions were withdrawn and two were lapsed. In other words the government responded fully to 79% of the total questions submitted.

The main opposition PMLN asked the most questions, 9, 903, which is 62% of the total questions. More active in their oversight role, 20 PMLN female legislators asked 5,347 questions; on average each of them asked 267 questions.

In five parliamentary years, 23 legislators, among them five women and 18 men, did not take part in any parliamentary business. The highest number of legislators not taking part in the proceedings belonged to PPPP – eight or 6% of the total party strength of 127 in the House.

Similarly, the breakup of others staying away was PMLN (nine out of 92), PML (eight out of 50), ANP (two out of 12), PMLF (one out of five). Among single-member parties, the PPPS and BNPA took part in the proceedings while the NPP did not. All 25 MQM members, members on reserved seats for religious minorities and 11 FATA members participated actively in the five parliamentary years.

Out of total 245 resolutions moved in the lower house in the five years, 85 were adopted. Six resolutions were passed on women’s issues and five each on minorities’ rights and blasphemy. Similarly on a host of issues such as Balochistan, increase in prices of petroleum products, child rights, killing of polio workers and journalists, democracy, attack on Malala Yousafzai, terrorism, human rights, situation in Swat, NATO attack on Salala check post, target killings, missing persons, killing of Osama bin Laden, creation of new provinces, employment, and obscenity on cable TV, the lower house adopted resolutions.

Bipartisanship was observed between the opposition and the coalition legislators against treasury backed agenda in the fourth parliamentary year. PMLN and MQM members jointly submitted a resolution in the 30th session opposing the Income Tax ordinance that the treasury was contemplating to introduce in an effort to reform the General Sales Tax mechanisms. The resolution was never introduced as the government agreed to withdraw the Bill.

In the five parliamentary years, 90 calling attention notices and 21 resolutions were jointly sponsored by members from various parliamentary parties.

Two in-camera joint sessions in the first and fourth parliamentary years debated the security operation in Swat and the May 2 operation by US that killed Osama bin Laden. In these sessions top military officials briefed the legislators on national security.