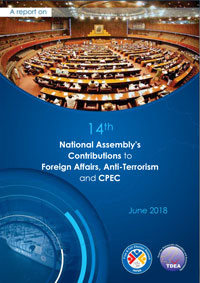 ISLAMABAD, Jun 27, 2018: The 14th National Assembly dedicated almost eight percent of its agenda to matters concerning foreign affairs, anti-terrorism and the China Pakistan Economic Corridor (CPEC) during its five-year term that concluded on May 31, 2018. The House preferred the government-sponsored and supplementary business items over private lawmakers’ interventions over these issues, says a press release issued by the Free and Fair Election Network (FAFEN) on Wednesday.

Pakistan witnessed crucial foreign relation challenges during last five years, including increasing tensions with neighbouring India and Afghanistan, various conflicts in the Muslim world, and strained ties with the United States (US) amidst warming relationship with Russia and the development of CPEC. Despite the urgency warranted by many of these issues, the government avoided proactive deliberation on foreign affairs in the National Assembly. In fact, some efforts by private lawmakers, particularly by opposition members, to take up these issues in the House were stalled.

Parliamentary business on foreign affairs accounted for nearly five percent of the regular agenda tabled in the House during the Assembly’s term, of which almost 85% was addressed during House proceedings while the remaining lapsed. Agenda related to foreign affairs included 24 (5%) Calling Attention Notices (CANs), 55 (12%) resolutions, 27 (10%) Motions under Rule 259, 671 (5%) questions and a private member’s bill which did not proceed beyond committee deliberation.

Lawmakers raised matters concerning Pakistan’s relations with Muslim countries, particularly in the context of Middle Eastern crises, with India in the context of the Kashmir issue, and with the US in the backdrop of the War on Terror, and the Pakistan Foreign Office’s performance in facilitating overseas Pakistani citizens, especially workers and prisoners in jails abroad. More than two thirds (67%) of the resolutions on foreign affairs were moved as supplementary agenda, i.e. they were not included on the House’s Orders of the Day. Through these resolutions, the House expressed its opinions and recommendations to the government regarding various matters in the ambit of foreign affairs.

The House, in a resolution, recommended that the government should consider suspending diplomatic ties with the US following President Trump’s statement deriding Pakistan’s role in and contributions to international anti-terrorism efforts in Afghanistan. However, the fate of this resolution, among others, remains unknown. Lawmakers underlined similar issues through CANs; of 24 notices, 83% were successful in drawing responses from the government whereas the remaining 17% were not addressed.

Moreover, only 30% (or eight of 27) of the Motions under Rule 259 moved on foreign affairs issues were discussed in the House. The majority of the Motions discussed (six) were initiated by the government whereas similar Motions by private lawmakers were largely ignored during the Assembly’s five years. Through a private member’s bill, the opposition party Pakistan Tehreek-e-Insaf (PTI) proposed that the government should be bound to seek parliamentary approval prior to entering into any international agreement. However, the bill did not return to the House after its first reading and subsequent referral to the National Assembly Standing Committee on Foreign Affairs. Lawmakers also sought clarifications on several foreign affairs matters from various Ministries during the Question Hour; 90% of 671 questions received responses.

The Assembly’s business on issues regarding terrorism and anti-terrorism constituted only about one percent of the House’s total agenda. The House addressed 61% of these agenda items whereas the remaining 39% remained unaddressed. The agenda included 16 (3%) CANs, 38 (8%) resolutions, 16 (6%) Motions under Rule 259, 131 (1%) questions and 16 (8%) government bills. Through these agenda items, lawmakers expressed reactions to various incidents of terrorism in the country and formulated a collective response on anti-terrorism measures to be suggested to the government. Militancy in the tribal areas bordering Afghanistan and rehabilitation of Internally Displaced Persons (IDPs) were recurring themes in these agenda items.

In a bid to strengthen the anti-terrorism regime in the country, the 14th Assembly passed laws that included extending the jurisdiction of military courts to civilians. These included amendments in the constitution and other relevant laws. Additionally, the Assembly introduced changes in the laws governing registration of foreigners in the country and the functioning of the National Counter Terrorism Authority (NACTA). However, a resolution tabled by a PPPP lawmaker on measures to improve NACTA’s effectiveness was rejected by the majority due to the treasury’s opposition.

The House held discussions on government-sponsored Motions under Rule 259 following every major terrorist attack in the country. All such discussions were centred on the opposition urging the government to activate NACTA and the government reiterating its commitment to eradicate terrorism from the country. The National Security Policy 2014-2018 was also discussed in the House, however, private lawmakers’ Motions to discuss the law and order situation, the NAP, attacks on polio-vaccination workers, and cross-border terrorism were ignored by the House. Moreover, lawmakers sought information from the government on terrorism-related matters through 131 questions, of which 61% received responses during the Assembly’s term.

Business concerned specifically with CPEC included one CAN and 116 questions only, which account for roughly one percent of the total questions asked during the Assembly’s five-year term. Lawmakers sought information on various CPEC projects, CPEC routes, and security provisions for projects and personnel.