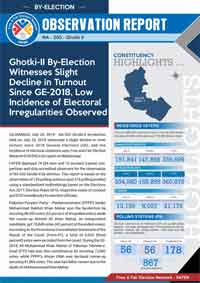 FAFEN deployed 74 (64 men and 10 women) trained, non-partisan and duly accredited observers for the observation of NA-205 Ghotki-II by-election. This report is based on the observation of 129 polling stations (and 374 polling booths) using a standardized methodology based on the Elections Act, 2017, Election Rules 2018, respective codes of conduct and ECP’s handbooks for election officials.

Pakistan Peoples’ Party – Parliamentarians’ (PPPP) Sardar Muhammad Bakhsh Khan Mahar won the by-election by securing 89,359 votes (53 percent of the polled votes), while the runner-up Ahmed Ali Khan Mahar, an independent candidate, got 70,848 votes (42 percent of the polled votes).  According to the Provisional Consolidated Statement of the Result of the Count (Form-47), a total of 6,032 (three percent) votes were excluded from the count. During the GE- 2018, Ali Muhammad Khan Mahar had won this constituency as an independent by securing 72,082 votes, later he joined Pakistan Tehreek-e-Insaf (PTI) while PPPP’s Ahsan Ullah was declared runner-up securing 41,885 votes. The seat had fallen vacant due to the death of Ali Muhammad Khan Mahar.