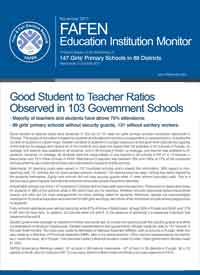 Good student to teacher ratios were observed in 103 out of 147 state run girls’ primary schools monitored nationwide in October. The quality of education imparted to students at educational institutions is dependent on several factors, including the number of students in a given class. Greater numbers of students in a single classroom at any given time reduces the capacity of the teacher to engage and interest all of the students and does not exploit their full potential. In 67 schools in Punjab, on average, one teacher was available to 34 students, and in 36 schools in Sindh, on average, one teacher was available to 27 students.

However, on average, 40 students were the responsibility of one teacher in 29 schools in KP, 41 in 12 schools in Balochistan and 72 in three schools in FATA. Attendance of teachers was between 76% and 100% at 77% of the monitored schools while the same attendance ratio was maintained by students at 63% schools.

Nationwide, 41 teaching posts were vacant in 137 monitored schools which shared this information. With regard to non-teaching staff, 131 schools did not have sanitary workers. However, 132 were found to be clean, hinting they were cleaned by the students themselves. Eighty nine schools did not have security guards while 17 were without boundary walls. This is a serious issue given that girls’ educational institutions are under greater threat from terrorists.

At least 80% schools out of the 147 monitored in October did not have staff-rooms for teachers. There were no desks and chairs for students in 48% of the schools while a fifth didn’t have any for teachers. Nineteen schools nationwide lacked black/white boards and 44% did not have arrangements for clean drinking water for students.

Moreover, despite the acknowledged importance of physical education and exercise for both girls and boys, two-thirds of the monitored schools lacked playgrounds for students. Forty schools nationwide were without electricity while 67% of those in Balochistan, at least 30% in Punjab and Sindh and 17% in KP did not have fans. In addition, 23 schools were not well-lit. In the absence of electricity it is especially important that classrooms be well lit.

Greater government oversight is needed to monitor and rectify lack of crucial non-teaching staff like security guards and other considerations of physical infrastructure. Elected representatives and governments officials made 92 visits to 147 schools in the past three months. Two visits were made by Members of National Assembly (MNAs), both to schools in Punjab, while one was made by a Member of Provincial Assembly (MPA), also in the same province. Other elected representatives (ex-nazims etc.) made five visits, all in Punjab. The Executive District Officers/Education made 23 visits. Other government officials made 61 visits.