Increase in Cases of Forced Marriages 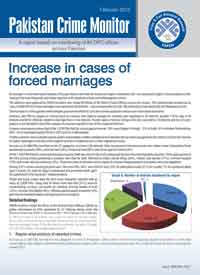 A report based on monitoring of 84 DPO offices across Pakistan

ISLAMABAD, March 15, 2012: An increase in cases of forced marriages was recorded in December 2011 with an average 14 First Information Reports (FIRs) being filed per district as compared to eight in the preceding month, says a Free and Fair Election Network (FAFEN) report on Thursday.

The statistics were gathered by FAFEN monitors who visited 84 offices of the District Police Officers across the country. The collected data reveals that as many as 568 FIRs for forced marriages were lodged in 40 districts – Lahore topping the list with 198, followed by Islamabad (36) and Sheikhupura (34).

On the other hand, 255 FIRs for assault or criminal force to a woman with intent to outrage her modesty were registered in 35 districts; another 173 for rape in 40 districts and 60 for offences related to marriage filed in nine districts.

According to the report, there were 20 cases of honour killings reported in 13 districts and two of word, gesture or act intended to insult the modesty of a woman registered in one of the monitored districts.

The report said a better outreach, lack of parallel judicial system and probably a better confidence level between the law enforcing agencies and citizens could be the reasons for higher reportage of not only crimes against women in Punjab but also of other registered crimes.

The report said that as many as 37,848 FIRs were filed for 27 categories of crimes in 84 districts. Sixty one percent of the total crimes were ‘other crimes’ followed by those pertaining to property (20%), physical harm (9%), threat and fraud (8%) and crimes against women (3%).

Of the 7,478 FIRs filed for crimes pertaining to property, theft was not only the most widespread but also the most frequently reported. Thirty eight percent of the FIRs among crimes pertaining to property were filed for theft, followed by motor vehicle lifting (24%), robbery and dacoity (17%), criminal trespass (10%) and motor vehicle snatching (10%). Thirty two cases of extortion and six cases of criminal misappropriation of property were also registered.

Threat and fraud crimes were the third most frequently reported with 2,839 FIRs registered, of which more than half (51%) were for counterfeiting currency, one-fourth for cheating, criminal breach of trust (13%), criminal intimidation (8%), offences against public tranquility (3%) and nine for fraudulent deeds and dispossession of property.

About FAFEN: FAFEN is a network of 42 civil society organizations working to foster democratic accountabilities in Pakistan. It is governed by the Trust for Democratic Education and Accountability.