Increase in Offences Related to Marriage 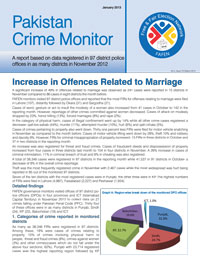 A significant increase of 49% in offenses related to marriage was observed as 241 cases were reported in 15 districts in November compared to 86 cases in eight districts the month before. FAFEN monitors visited 97 district police offices and reported that the most FIRs for offenses relating to marriage were filed in Lahore (107), distantly followed by Okara (31) and Sargodha (21).Cases of word, gesture or act to insult the modesty of a woman also increased from 41 cases in October to 142 in the reporting month. However, reportage of other crimes committed against women decreased.

Thirty-one percent less FIRs were filed for motor vehicle snatching in November as compared to the month before. Cases of motor vehicle lifting went down by 28%, theft 10% and robbery and dacoity 9%. However, FIRs for criminal misappropriation of property increased- 15 FIRs in three districts in October and37 in two districts in the reporting month.An increase was also registered for threat and fraud crimes.

Cases of fraudulent deeds and dispossession of property increased from four cases in three districts last month to 104 in four districts in November. A 26% increase in cases of criminal intimidation, 11% in criminal breach of trust and 9% in cheating was also registered.A total of 38,346 cases were registered in 97 districts in the reporting month while 41,537 in 91 districts in October- a decrease of 8% in the overall crime reportage.Theft was the most frequently registered crime in November with 2,467 cases while the most widespread was hurt being reported in 85 out of the monitored 97 districts.Seven of the ten districts with the most registered cases were in Punjab; the other three were in KP. The highest numbers of FIRs were filed in Lahore (4,987), Faisalabad (2,227) and Peshawar (1,934).