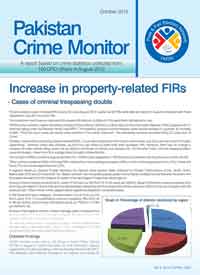 ISLAMABAD, November 6: Property-related cases increased 9% during the June-August 2012 quarter as 85 FIRs were filed per district in August compared with those registered in July (81) and June (78), says a Free and Fair Election Network (FAFEN) report.

The report released on Tuesday said as many as 8,535 FIRs for property-related crimes were registered in 85 districts in the monitoring month;  8,038 such cases were reported in 99 districts in July.

FAFEN crime monitors visited 100 offices of District Police Officers (DPOs) to collect data on First Information Reports (FIRs) registered for 27 offences falling under the Pakistan Penal Code (PPC). The statistics showed criminal trespass cases almost doubled in a quarter- an increase of 94%. Thirty-five such cases per district were reported in the month observed – the preceding numbers recorded being 22 (July) and 18 (June).

Similarly, motor vehicle snatching cases increased 62%– 21 per district reported in the month under review. July and June had 15 and 13 cases respectively.  Extortion cases also doubled, up from four per district to eight while theft increased 10%. However, there was no change in numbers of motor vehicle lifting cases (34 per district) and those of robbery and dacoity (24). On the other hand, criminal misappropriation cases fell sharply – down from 33 in a single district to eight in three districts.

‘Other crimes’ constituted 59% of the total FIRs, followed by crimes relating to property (20%), crimes involving physical harm (12%), threat and fraud (7%) and crimes against women (2%).

A regional break-up showed Punjab reporting the highest crime burden (64%) followed by Khyber Pakhtunkhwa (21%), Sindh (14%), Balochistan (2%) and ICT (less than 1%). Better outreach, lack of parallel judicial system and a higher confidence level between the police and the people are said to be the reasons for better crime reportage in Punjab than other regions.

In the threat and fraud category, criminal breach of trust shot up 21% (from July’s 14 to 17); counterfeiting currency increasing 19% (from 44 to 48 per district) and criminal intimidation going up 7%(from 15 FIRs per district to 16). Among crimes against women, forced marriage cases increased from eight per district in July to 12 recorded in August. All other crimes in this category either fell or remained unchanged. Ten districts, nine of them in Punjab and one in Khyber Pakhtunkhwa reported 46% of the total FIRs. Lahore (14%), Faisalabad (7%) and Gujranwala (5%) were the highest reporting districts.