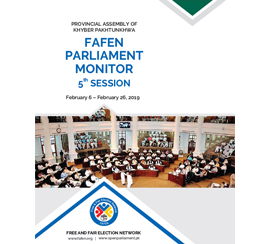 As many as 74 out of 124 lawmakers (60%) did not participate in the general discussion on budget 2018-19 held during the 7th session of the Provincial Assembly of Khyber Pakhtunkhwa (KP), observes Free and Fair Election Network in its session report.

The session comprised 13 sittings held between June 18 and July 22, 2019 and 50 lawmakers (40%) sitting members took part in the general discussion on the Finance Bill, 2019 laid by Provincial Minister for Finance in the first sitting.