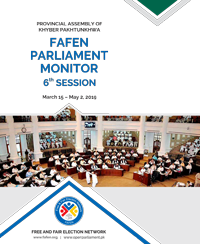 ISLAMABAD, May 3, 2019: The Provincial Assembly of Khyber Pakhtunkhwa (KP) addressed 94 percent of its scheduled business during sixth session that comprised 20 sittings held between March 15 and May 2, 2019, observes Free and Fair Election Network in its session report.

The overall business including regular and supplementary agenda brought before the House during sixth session comprised 15 government bills, 24 resolutions, 43 Calling Attention Notices (CANs), five Question of Privileges (QoPs) and 11 discussions on issues of public importance. Nearly 71 percent of the House business was included on the List of Business while the remaining 29 percent items was moved as supplementary agenda.

Of 124 lawmakers, 58 (47 percent) including 48 men and 10 women contributed to the proceedings of the House by sponsoring various parliamentary interventions and/or contributing in the debates. The active lawmakers belonged to PTI (30) ANP and MMAP (10 each), PPPP (five) and PML-N (three).