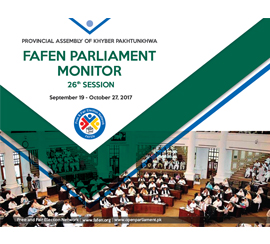 The session comprised 12 sittings held between September 19, 2017 and October 27, 2017. The House did not take up a majority of the oversight agenda as 15 out of 20 (75%) Call Attention Notices (CANs), 67 out of 140 (48%) Starred Questions and one out of two (50%) Adjournment Motions lapsed without being discussed during the proceedings due to the absence of relevant lawmakers or ministers.

With an average of 30 lawmakers (24% of the total membership – 124) present at the start and 27 members (22%) at the end of each sitting, the 26th session of the KP Assembly also witnessed low attendance of lawmakers as four out of eight (50%) sittings were adjourned due to lack of quorum. A maximum of 45 (36%) members including two minority lawmakers, on average, attended the session. The quorum was pointed out on a total of six occasions during the session. On four of these instances, the proceedings were adjourned while once the quorum was completed following suspension of 25 minutes. On one occasion, the quorum was found complete on counting.

The House adopted ten resolutions during the session condemning the violence against Rohingya Muslims in Myanmar and human rights violation in Kashmir and urging the government to appoint the Vice Chancellor of the University of Swat, provide suitable facilities to the women prisoners, regularize the employees of District Development Accounts Committees; provide electricity to people of Mastooj from Pakhtunkhwa Energy Development Organization (PEDO), launch plantation campaigns in educational institutions, pay compensation to the families of Balochistan mine incident victims, set up Hazara Electric Supply Company, and accelerate diplomatic efforts to resolve tension between Saudi Arabia and Qatar.

The House took up five out of 21 CANs submitted by the lawmakers. The relevant government ministers responded to these CANs. The remaining 16 CANs were not addressed due to absence of the relevant lawmakers or ministers. The lawmakers highlighted the issues related to inductions in Health Care Commission during 2016, difficulties faced by students due to online college admission system, irregularities in results of Matric and Intermediate examinations conducted by Malakand Education Board, closure of development schemes in PK-93 constituency, depriving graduates of foreign or private medical colleges from paid house jobs in government hospitals, demarcation of land of other districts in newly notified District Kolai Pallas Kohistan, delay in construction of road in Gulshanabad Peshawar, self-made speed breakers on various roads, lack of facilities at Police Housing Colony Abbottabad and reservations of the Dasu Dam affectees over amount of compensation  paid to them by the government.

The House took up a JUI-F lawmaker’s Adjournment Motion regarding nepotism in District Education Office (DEO) in Hangu and referred it to the relevant committee for further discussion. Another adjournment motion of ANP lawmaker regarding spread of dengue fever in the Province was not taken up.

The lawmakers belonging to JUI-F and PTI moved five privilege motions against the government departments and their officials. The House referred these motions to the relevant committee for further consideration.

The lawmakers raised 12 Points of Order (POs) consuming an hour and five minutes whereas the proceedings witnessed two instances of walkout throughout the session. Entire opposition left the House for to register their protest against the privatization of government colleges and not referring a Starred Question to the concerned committee. The lawmakers remained absent from the proceedings for 57 minutes on pretext of walkout.

Two lawmakers belonging to the ruling party PTI also staged protests during the proceedings against the Chair for disallowing a point of order and against the federal government for utilizing of the Peshawar’s development funds for bye-election campaign in NA-4. The lawmakers of PTI and PML-N chanted slogans against each other during a sitting.